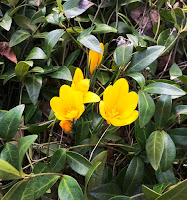 It is still winter but the crocuses know what is coming and they want to be first to celebrate. They pop out in lovely bloom sometimes pushing through a dusting of snow, though this week has been a weather surprise, for them I suspect as well as for us. We have been having 70 degree days in February!

I wrote about a similar uptick in temperature in 2012. The weather seems to be changing and not just seasonally. There is evidence of a rise in temperature in many directions; sea levels are rising, glaciers are retreating, extreme weather events are happening more frequently. There have always been shifts in temperature but this seems to be man-influenced. The atmospheric carbon dioxide is the highest it has ever been, keeping in the earth’s heat.

It’s hard to deny the evidence though some people do try to. I think it’s better to work with science than to deny it. Our planet is such a beautiful place, I hope we can respect it and protect it. Soon many flowers will bloom and remind us of the seasons ahead. Right now, however, it’s the crocuses’ job to alert us to Earth’s offerings and encourage us to value what wonders we have.

Lots of crocus info on planting and care:
http://www.almanac.com/plant/crocuses