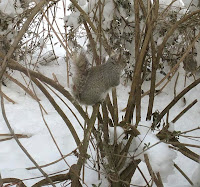 I thought of Darwin and the survival of the fittest theory. The scene I had just witnessed made me re-think what the fittest means. Is it the most physically fit, the strongest? Is it the most adaptable gene pool? Perhaps it refers to a superior mental agility. Maybe it’s all of the above. Certainly, in this case, survival was due to some very clever actions. It makes me wonder how over the years scientists could discount the thought process in animals. That seems to be changing. I hope so. This was an impressive display of individual problem solving and what clearly seems an example of the survival of the cleverest.
I am sure I’m not the only one to witness the actions of some very clever animals. If you have, too, share what you’ve seen with us.
Posted by ferida at 2:10 PM No comments:

The Legacy of Snow

What a winter we’re having. Snow, on and off, and cold, cold, cold. Last week we had just a thin covering of the white stuff but it was still enough to play in. Or maybe not. Are the kids, are we, getting jaded? The major (so far) snowfall brought out the shovels, serious work for adults and fun help for kids. The big storm yielded snowmen on front lawns, with traditional carrot noses. The medium one was good for stomping through piles of slush. This little one, well, it seemed to be ignored. All it was good for was brushing off the car and watching it evaporate as the day wore on. This week a combination of rain and snow is predicted here; not much fun.

I remember the huge snowstorms of my childhood or maybe they just seemed big to me. My friends and I made snow forts and threw snowballs at each other. We took out our pails and constructed snow castles with turrets and protective snow walls. If the snow was high enough, we dug tunnels snaking through them from our house to the neighbor’s.

Then it was my children’s turn. They dragged their sleds, one yank at a time, up and down the street or found hills to roll down. Mugs of hot chocolate steamed in the kitchen impatiently waiting for them but it was too tempting to make one more snow angel before coming inside.

I hope the frequency and the inconsistent quality of the snow won’t ruin the joy of it for the kids this year. For an adult, it is often seen as a nuisance; it shouldn’t be for children. How wondrous to have the sky slowly drift down to change the landscape from everyday to magical, to blur the absolute with a delicate coating of possibility, to kiss a cheek with just a hint of a story and then disappear. Let’s awaken every purple pail from the pile of slumbering beach gear to join in the adventure and re-purpose each sled or pot lid or trash can cover to serve the cause of fun. And may we all appreciate, and delight in, the altered state of mind that is the legacy of snow.
Posted by ferida at 6:16 AM 3 comments:

The Joy of a Sunrise

There are joys and challenges when returning from faraway, sometimes both at the same time. There is joy in the comfort of our usual routine but a challenge in that it is often what makes us need the vacation in the first place. Joy in being grateful for the kind of life we live but a challenge to our need to help others have a good life, too. And also joy in reconnecting with the people in our life despite the challenge of some more difficult relationships.

One of the challenges of coming home from a long-distance place is jet lag. It takes a body some time to readjust to the time zone it is used to. A twelve hour difference makes itself known. That became clear when I fell asleep at the computer while working on a book I’m writing, and when I thought I would take a twenty-minute nap and ended up sleeping over two hours instead. But then, there is the delight of waking early and seeing the sun rise into the day. Many days of sunrises does not dull the joy of such beauty.
Generally, morning is not my favorite time of day. It takes me a while to get going. Yet how could I not be awed by such a display? One day I watched the sky slowly spread fingers of pink between the bare winter branches. Another day gold lifted over the rooftops like a conductor’s arms raising a baton to begin the day’s concert. What a grand way to awaken. Maybe I will start appreciating morning now so as not to miss the joy of a sunrise.
Posted by ferida at 2:00 PM 2 comments: 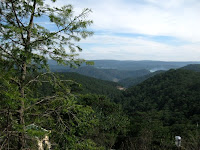 Have you noticed that three weeks have passed without a post to Ferida’s Backyard? I was on vacation and taking a break from all things usual which, I believe, is the definition of vacation. Where was I? In Vietnam, a land I never expected to visit but I am so glad that I did.

I was concerned about how the Vietnamese people felt about Americans. What I found was a friendly welcome. There are museums and monuments that refer to our war involvement and some of that is hard to look at. Yet, for the most part, Vietnam is a country that is putting aside the past for a vibrant future. It is a communist country but one that is enjoying peace, a change from an often war-torn history.

I had imagined a land of flat fields and much of it is that, a countryside where rice fields abound. Rice is a staple in Vietnam, with several crops a year harvested. There are other parts, though; a UNESCO World Heritage site at Halong Bay where islands shift in and out of view in the morning mists and hide treasures like incredible caves, and the winding road through dense green hills to the city of Dalat. There are also fishing villages and fish farms and islands in the Mekong Delta where coconut and banana trees are plentiful.
It was a privilege to expand my backyard to this Asian land, to experience the terrain and its citizens, to share in the local foods and customs, and to remember about the commonality of all people in our desire to live joyful, peaceful, successful lives. A broader backyard encourages a larger global understanding and a fuller connection to all expressions of this earth.
Posted by ferida at 11:30 AM 1 comment: