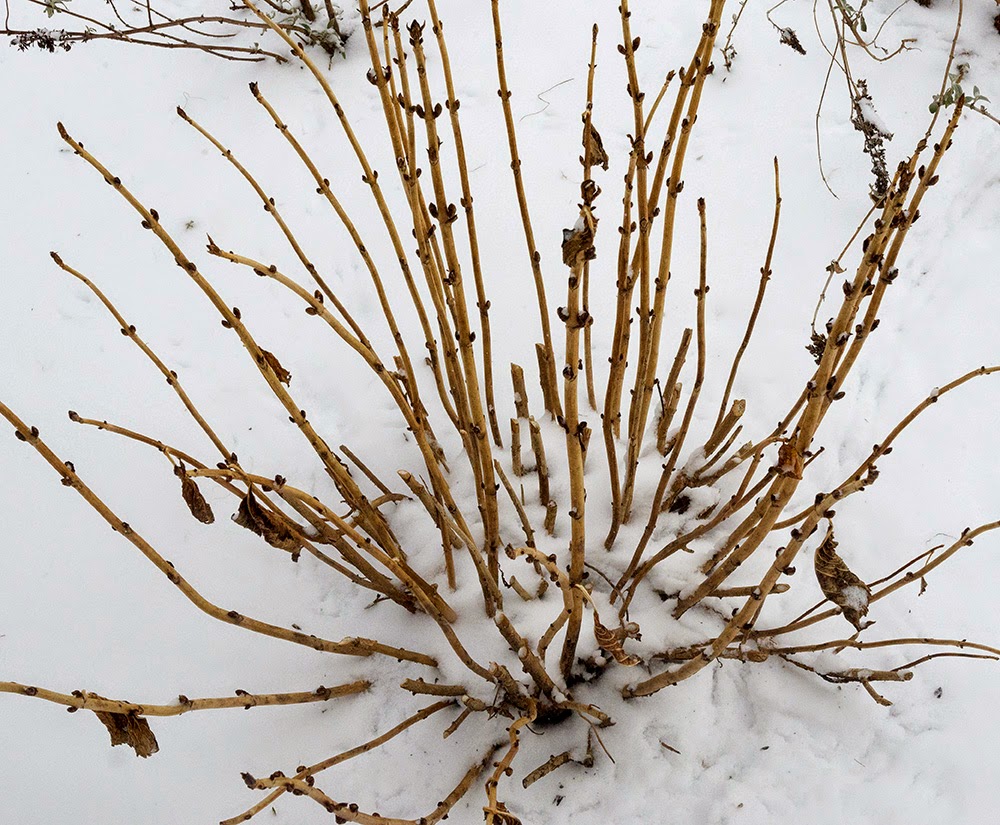 Well, winter made its presence known today with a storm (some are calling it a blizzard) that dropped snow on a large portion of the Northeast. We were lucky, with only a few inches in our area as opposed to a couple of feet in New York and Boston. More snow is being predicted for Monday. But that is days away and there are things to be done now.

We had to shovel, of course, and the township trucks were on the job early. The birds were a constant presence in our yard and the squirrels were digging into the snow for their buried acorn treasures. Rabbits left footprints as they looked for food. Everyone seemed busy.

But there is a quiet scene, too. In the midst of it all, Mother Nature is planning for the spring. With branches bare and its roots covered in snow, the hydrangea bush is laying on buds. It’s hard to imagine from the tight nubs the beautiful leaves and flowers that will delight us next season. The comfrey leaves have shriveled and gone yet I know the plant is only storing its energy and will return for another year. The hibiscus branches are white and brittle but they can’t fool me. Their blossoms will be dazzling late spring and well through the summer months.

It is the hydrangea bush, though, that is speaking to me now. I know some hydrangeas need shelter but mine have had an unsheltered life and still bloom. I am grateful for that. I sense its determination to survive and thrive despite difficulties. It reminds me that we all have things in life that are challenging and yet there is the hidden drive to blossom when we can, to let our inner selves support us until the right time comes to let the world see our beauty. Sometimes it’s hard to remember what’s inside but the hydrangea can remind us that it is worth the effort.

Taking care of your hydrangea:
http://www.hydrangeashydrangeas.com/winter_protect.html

What to grow in winter:
http://www.redbeacon.com/hg/10-best-garden-plants-grow-winter/

It’s nice to think that things we value last forever but it isn’t always so. Case in point – the Passenger Pigeon. The New Jersey State Museum in Trenton is paying homage to the bird. Through June 27, 2015, it commemorates the 100th anniversary of the death of Martha, the very last passenger pigeon in the world, who died on September 1st, 1914.

The birds once numbered in the billions but within a few decades became extinct. They were over-hunted and their forest nesting areas were decimated for agriculture. It’s ironic that the largest bird population in the world came down to zero, because of us.

Yes, we humans have needs – for housing, for sustenance, for reproduction. But so do other creatures. Should our needs always supersede those of others? We’re smart, surely we can figure out how to live within nature rather than decimating nature.

We can ask this about people, too. Can we respect all life, even if it is dissimilar to our own? Can we make room for those who look different from us, who hold various opinions, who have other beliefs? Or are we destined to be passenger pigeons, extinct by our own hands?

Facts about the Passenger Pigeon:
http://www.wbu.com/chipperwoods/photos/passpigeon.htm

A state-by-state look at the Passenger Pigeon:
http://passengerpigeon.org/index.html

Go see the exhibit for yourself!
http://www.state.nj.us/state/museum/dos_museum_exhibit-pigeon.html
Posted by ferida at 4:20 PM 4 comments: 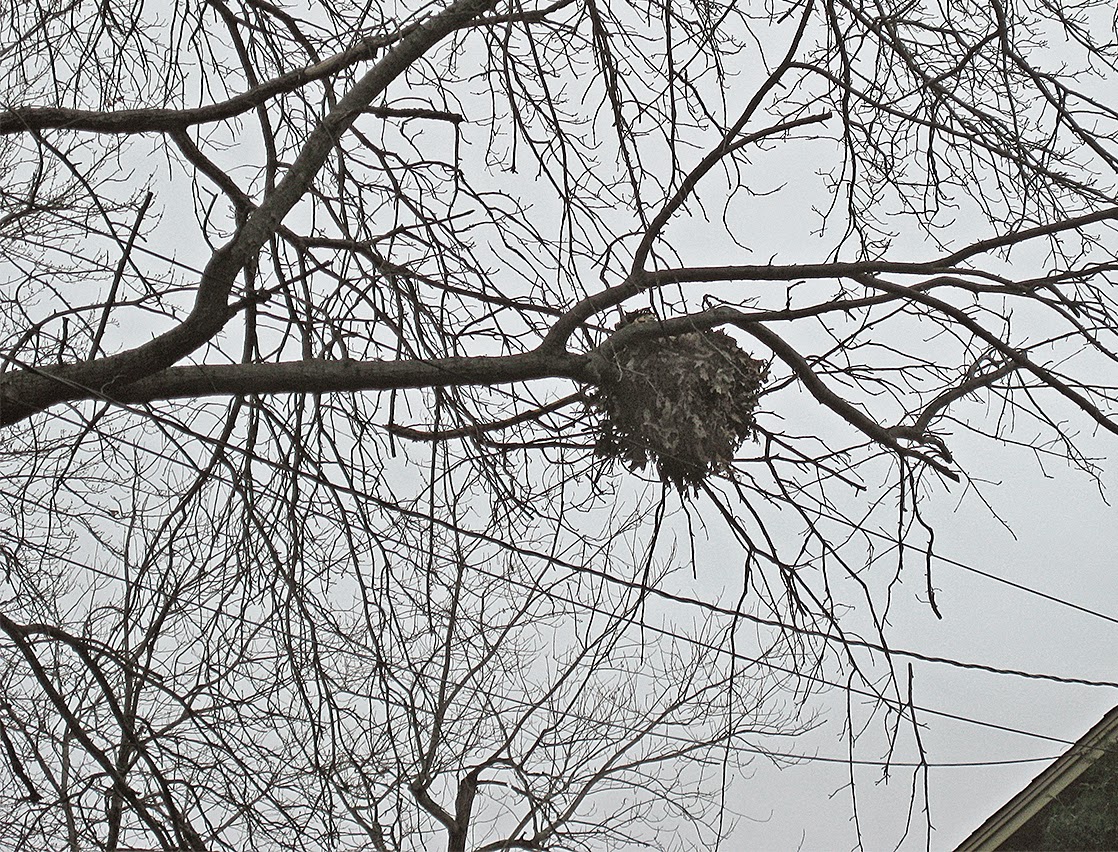 We’ve had a few cloudy days here, some rain, a bit of snow these past few weeks. Things look bare and winter-worn and we are only a third of the way into the season. The trees reveal their hidden nests, small ones for birds, larger ones for squirrels. The natural world seems to be in waiting mode.

What about all the excitement of the new year? Has it disappeared already?

Not for Mother Nature, it hasn’t. Nature is alive and active: there is life to protect during the cold months. The leaves may be gone but the trees have merely slowed down, conserving their energy in a process called dormancy, waiting for Spring. Squirrels are busy fattening up for the coming cold weather still to come. Birds fluff up their feathers to keep themselves warm as they munch on the seed in the feeders or wherever they can find it and seek shelter in coniferous tree branches. Deer huddle in groups, slow their metabolism, and watch out for each other. Chipmunks semi-hibernate, lowering their body temperature, though they don’t actually sleep.  They are coping with winter in their own special ways.

And what about us? How are we coping with winter?

Just because it’s cold doesn’t mean we have to hibernate. It’s a good time to reconnect with friends who are busy all summer. Libraries offer programs like book discussions, art exhibits, author visits. Forget resolutions – follow your intentions to do what feels right to you. Every year, every season has its excitement. It’s called life.

Birds keep warm in winter:
http://www.mnn.com/earth-matters/wilderness-resources/stories/how-do-trees-survive-winter
Posted by ferida at 7:27 AM 2 comments: