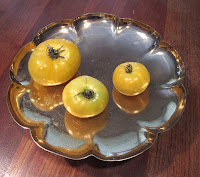 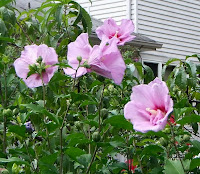 I lived in the city when I was growing up. There wasn’t much room for growing things in the summer. My backyard consisted mainly of a paved driveway and a small slab of concrete, room enough for a couple of chairs that were never sat on. The tiny plot of grass was home to an outdoor clothes dryer. By contrast, the front of my house seemed almost lush. There were rows of white, purple and red portulacas on either side of the walkway leading to my house, a few hedges, and an exuberant Rose of Sharon shrub. Each time I left the house, the flowers would surprise me. They were so out there, bursts of pink that greeted the day and lasted until they closed and fell at night. They didn’t seem to mind that they were growing in a limited space or that they were far from their tropical roots. Each day was new and they made the most of it.

Now I have my own Rose of Sharon. It was a gift from my daughter’s in-laws who have a yardful at their home. They warned us, though, that it can take over. They were right. We remove any outcroppings we see around the bush but somehow the seeds made their way to the rear of our yard and they are now challenging the privets we have back there. It doesn’t seem to matter that they supposedly prefer full sun (they are in full shade) or that they like well-drained soil (we have marl that can be quite swampy). Sometimes they need reining in but I can’t help admiring them for their joie de vivre.

It is a boost to my spirit whenever I see them. There are so many reasons in our world to focus on the negative, to allow joy to withdraw or wither. These bushes thrive no matter what and express themselves in beauty and persistence. They are a vibrant life-force, as enticing as I remember. Seems like a good example to follow.

Being a member of the hibiscus family, Rose of Sharon is easy to grow. Take a look:
http://treesandshrubs.about.com/od/commonshrubs/p/RoseofSharon.htm 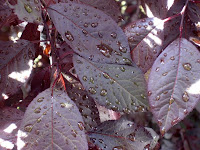 Last week we had a tiny bit of rain. It was so welcome but it didn’t add up to much and the garden was still panting with the heat. I took a photo of the leaves on the Flowering Plum tree just to document that we had some rain, little though it was. And then there was yesterday. Out of the blue, literally as the sky had been cloudless and the sun brilliant, gray clouds started to gather. Low rumbles could be heard. And then – BOOM – a flash of lightening, a loud bang of thunder, and the sky became a waterfall. The rain overwhelmed the gutters and cascaded down along the perimeter of the house. The water slooshed over driveways, flooded the sidewalks, pounded hard on unsuspecting plants. Then it started to ping against the siding. The raindrops now alternated with hail, small, hard ice balls, which grew larger as the storm continued. Crack. Ping. Splat. The percussion section in a weather symphony.

We were standing by our front door watching the concert and noticed the neighbors across the street and some down the block were doing the same. One of our neighbors pulled up in his pickup and made a mad dash for his porch. When things started to calm down, he took an umbrella and splashed his way across the lawn to check on his plants. I wondered how our tomatoes had fared. Had they been squashed? One was almost ripe – I wished I had picked it and let it finish ripening on my kitchen counter.

All-in-all the rain, even with the unexpected hail, was welcome. The rain gauge registered 1 ½ inches. Yay. Today the grass that had not succumbed to during the various heat waves was smiling green. And the temperature went from the low nineties to the mid seventies and way less humid. Breathing weather.

Nature has been so different this year, all around the globe. Extreme. So has the world of humans. Revolutions, disagreements, political disputes, economic challenges pretty much everywhere. Is this a chicken and egg issue or coincidence? (I can here the shouts of those who believe there is no such thing as a coincidence.) Things certainly have heated up on a grand scale. I wonder how we can all find some breathing weather for life in general.