Robin at the Window 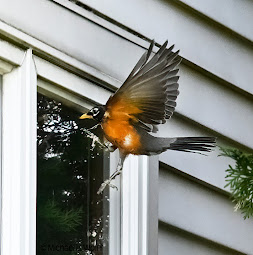 Robin at the Window

A strange thing happened this weekend. I heard a banging at the window of our den. The room is  at the back of our house so no one should have been there to knock. I thought it might be a pebble tossed by the wind. Then it happened again – and again. When I looked out back I saw a robin on the branch of an evergreen bush near the window. And then I saw the bird fly off the branch and knock its beak against the glass! It did this multiple times.

Okay, I thought. Maybe the robin sees a reflection of the bush and wants to land on a different branch. But I would imagine that after a few tries it would get the hint and stop. It didn’t. I went outside to encourage it away. It left as I opened the door but soon returned to continue its jabbing at the window.

It stopped when night came and I hoped that it was finished with whatever prompted its action. No such luck. I was awakened in the morning by the now familiar thumps. The robin was back at it. I thought that maybe if I blocked off the window with a blanket it would discourage the robin. It continued anyway. I removed the blanket and looked straight at the bird, telling it to leave. It just stared at me but didn’t fly away.

I thought that perhaps it was seeing its own reflection and thought it was another bird that was threatening in some way. Then my husband got an idea. He taped some newspaper pages on the outside of the window to hide whatever it was that the bird was seeing. We sat down to breakfast and listened as we ate. We did not hear any knocking! As the morning continued, all was quiet.

We can’t leave the papers there forever and there is rain in the forecast for tomorrow which should destroy the papers. Will the robin be back then? Who knows? I just hope it has satisfied what prompted this strange action and I wish the robin well – just not at my den window.