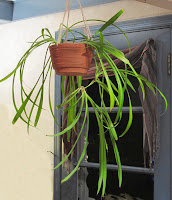 What busy days are holidays! Everyone seems occupied with the special things that make holidays so festive. With so much happening there is little time to notice when the ordinary things around us take on their own exceptional characteristics. And so my Spider plant grew and grew until I couldn’t ignore it any longer. When I finally gave it my attention I was surprised at how far it had reached despite my neglect or perhaps because of it.

Spider plants are easy to grow, beginner plants if you will, and almost foolproof for anyone to grow. They need little water and actually prefer dry soil. They also would rather not be in direct sunlight as their leaves are disposed to turn brown. As they mature they send out “babies” that can be clipped and repotted to make new plants. Spider plants do tend elongate so they need space to hang down. Hanging baskets are good places to grow them.

I appreciate houseplants that have a sense of self, that can thrive through their own strength and joie de vivre to what might be considered challenging conditions. My aloe plants, and there are several, have that same defining ability. They seem to laugh when I forget to water them and then put out new growth. The spider plant spreads its leaves and stretches further, calling for me to check its soil and give it what it needs.

Plants teach me stuff. I hope that I can be as resilient, as adaptable, should life require it of me.

Try growing a spider plant for yourself: 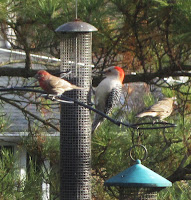 Look who we found on the bird feeder! Quite a big guest compared to the usual denizens. And what a treat to see - a Red-bellied Woodpecker. That would explain the different kinds of bird voices I have been hearing lately. I think I saw both a male and female chowing down. Woodpeckers are common in Eastern woodlands but as more woodland is being used for human habitats, I guess my slightly wooded backyard may have drawn them in.

As the weather cools down the crowd on the feeders heats up. Often the feeders are packed with finches and sparrows but there are others that find a meal here, too. Cardinals are regular visitors and now that the leaves have fallen, the brilliant red of the male cardinal is like a beacon on the bare branches. We see goldfinches (New Jersey’s state bird), chickadees, and nuthatches on a regular basis. There are wrens and cowbirds and the occasional hawk. And I mustn’t forget to acknowledge the blue jays – there are currently several of them visiting the feeders. Right now I am listening to a finch symphony from the forsythia bush on the side of my house.

I love seeing the variety of colors and personalities on the feeders. I think it is important for people to be sensitive to other life forms. Birds are usually a pleasing connection for most of us (though a raid by grackles on the black oil seed can prove costly). I think being aware of others helps us to be more expansive within ourselves. So peck away, woodpecker, and thank you for dropping by.

For info, sounds, and photos, this site by Cornell University is terrific:

Posted by ferida at 7:04 AM No comments: 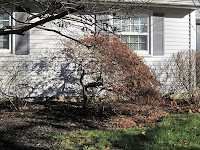