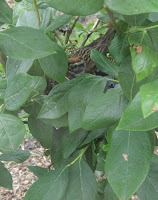 We went to pick blueberries this weekend. New Jersey is known for its blueberries (also cranberries, corn, and tomatoes). The bushes were spread out in long rows and every row had its devotees. It’s easy for families to bring their children blueberry picking. The bushes are low enough for small hands to contribute to the gathering. And there were children galore, happily pointing out the best bushes. In truth, all the bushes were best.

We picked lots of fat, ripe berries, almost eight pounds, but not nearly as much as the family before us in line. They picked about thirty pounds. With two extra pairs of hands the picking really picked up. It reminded me of taking our own children blueberry picking; it was an adventure as much as a functional trip. You never could tell what would happen. My very first published article was about a local blueberry field we visited as a family. It was a surprise that jump-started my writing career. And this day, too, brought a surprise, though not as dramatic.

Take a close look through the leaves of the photo. There is a mommy sparrow nestled in the blueberry bush. She’s hard to see but there she is, sitting on her eggs. Even though people kept pointing to her and talking close by, she didn’t move. No one, not even the young children who were entranced by the nest, did anything to frighten her.

The farmer knew about the sparrow and said she was used to people. This was an organic farm so he wasn’t worried about the health of the birds. He also told us that he has no trouble with critters stealing his crop. Because he doesn’t use artificial chemicals the red tailed hawks found their way to the farm and established a nest. It didn’t take long for the squirrels and rabbits to size up the situation, being a hawk’s food source, and hightail it to safer places.

I like that no pesticides were used; I try to buy organic as much as possible. To me organic tastes better. And these berries were no different. So far they have been 1) cooked in a blueberry cobbler, 2) sprinkled on top of homemade granola, and 3) eaten by the handful all by themselves. They are terrific!

Are you interested in organic blueberries? If you live in New Jersey, here is the farm we picked at: http://www.emerysfarm.com/index.html There are many pick-your-own farms across the country. This site directs you (Organic PYOs are indicated in green) state-by-state http://www.pickyourown.org/
Posted by ferida at 5:56 PM 1 comment:

Sweet Basil, yum. What a delicious herb. It is great in lots of dishes. It gives a mouth-pleasing taste when added to almost any sauce. Sautéed in cold pressed virgin olive with garlic and a variety of veggies (I love red peppers, onions, and zucchini) and mixed in with any kind of pasta, it makes a very satisfying meal. Toss some chopped basil onto a grilled cheese and tomato sandwich and see how it perks things up.

In researching the herb I discovered other wonderful things about it. I found out that, being a member of the mint family (who knew?), it is recommended for helping digestion. A cup of basil tea is very soothing. It seems that basil has a slight sedative property as well.

All this and a beautiful plant, too. The leaves are deep, vibrant green. Just gently touch them and you will release the sweet basil fragrance. Very pleasing. They are fairly resilient, too. If they wilt from too little water, just give them a drink and they’ll revive. During those 90 degree days my poor plant was panting for water. One morning when I went to check on it, I thought it was a goner. The leaves were completely wilted and the stems were bending and weak. Some diligent watering brought everything back to vibrant life.

Here’s a puzzler: Someone I know remembered his Italian grandmother telling him that it is best to pick the leaves toward the end of the day because that is when the oils have reached the leaves and the taste is strongest. Did anyone else hear that? Is it true? 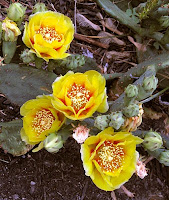 Several years ago I visited the shore house of one of my yoga students. She had a patch of prickly pear cactus growing on the side of her house. They were blossoming and I thought how exquisite the flowers were and how unexpected from such a harsh plant. She gave me a piece of the cactus, which I planted in my side yard. Over the years it grew slowly, putting out a few buds and a flower or two but this year…the cactus is in full bloom! I can only imagine what the desert must be like when the various cacti are blooming.

Besides the beauty of its flowers, though, this is a surprisingly beneficial plant. It is a complex carbohydrate food whose various parts may be eaten. The pads are vegetable-like with a green bean quality and okra texture, the flowers impart fruity tastes and can be made into candy or jelly, and when cooked down the nectar can provide an alcoholic kick (tequilas anyone?). It has medicinal qualities, too, that may in lower cholesterol and regulate glucose in diabetics; the sap is like aloe vera and can be used to soothe burned or irritated skin. But it is called prickly pear for a reason. The spines can hurt and can be hard to remove from unprotected skin.

I am not inclined toward anything except admiration right now so I’ll be careful and keep my distance. It is an interesting plant to ponder on, though. It’s beautiful but dangerous. It looks so plain until it flowers but what a wealth it is hiding. And one wouldn’t think that a cactus would survive in this northeastern environment yet here it is, bursting with life. A beautiful reminder of the mystery of nature.

Here are some more photos of prickly pears from the Google files:
Images for prickly pear cactus
Posted by ferida at 7:00 AM 2 comments: 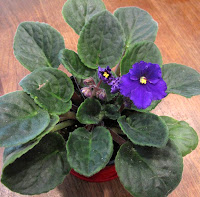 My mother-in-law loved African violets. Over the years she propagated hundreds, if not thousands, of plants. She had grow lights above rows and rows of pots. The flowers glowed in various shades of pink, purple, lavender, and blue. Some plants had white flowers with purple ruffled edges, some had double pedaled blossoms. I was surprised at the variety of possibilities that existed. She insisted on keeping the plants small, though I have seen plants that bloomed in twelve-inch pots, diligently removing any stray outcroppings and paring the stems to keep them contained. She was a faithful member of the African violet Society where she lived in Arizona, attending their shows and displaying her plants. Raising the violets was less of a hobby than a passion.

I can’t say that I am as enamored of African Violets as she was, but I have come to appreciate their delicate beauty. I have one plant out of the many she gave me over the years that still survives. It was doing well and then I moved it to another space in the house that it didn’t seem to like as much. It drooped and I thought I would surely lose it. I took leaf cuttings and am trying to resurrect it. When roots sprout I will repot it and return it to its original location. In the meantime, I have a store-bought plant is flowering and makes me smile. I don’t think I will ever be as good an African violet cultivator as Mom was but I am grateful that she helped me to see the fine quality of this tiny bit of nature.

Here is just about everything you need to know about the care and cultivation of African violets. Feel free to share your experiences with this lovely plant. http://www.uri.edu/ce/factsheets/sheets/africanviolet.html http://www.extension.iastate.edu/publications/rg322.pdf
Posted by ferida at 7:29 AM No comments: