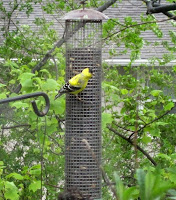 I saw my first goldfinch in the Berkshires hills in Massachusetts. How glorious it was – neon against the deep green pines. I think it helped awaken me to the joy of observing birds. Now I see goldfinches regularly on the feeders each spring; it is the New Jersey state bird. Familiarity does not diminish its impact, however. This is one beautiful bird! The male, of course, is the most brilliantly colored in it eye-catching golden yellow. It is hard for this bird to hide in the bushes. The female is less vibrantly colored though not without interest. She is a dusky yellow that requires a moment to define yet still is lovely.

They are seed eaters. I know they like thistle seeds but they seem pretty happy eating the black oil sunflower seeds that we provide all year round. Sometimes we have several goldfinch families vying for seed on the feeders. They are sociable birds and gather in groups. They hang out with the house finches, too.

Goldfinches build nests a little later than most birds because that’s when the seeds ripen. We discovered a nest about five feet off the ground, tucked into the branches of our forsythia bush. We kept a respectful distance until the nest was empty but then it was a welcome reminder all through the snowy winter that no matter the weather spring, and nests, will come again.
The male goldfinch is easy to spot if you want to interest kids in bird watching. Here is a free printable coloring page for the kids: http://www.friendsacrossamerica.com/colorstatenjbirdflower.html
Posted by ferida at 6:51 AM 1 comment:

My Easter cactus is in bloom. It is a delight to see the bright pink flowers opening up on my windowsill. And it’s right on time, an April bloomer. As usual, I have been somewhat lackadaisical in my stewardship of the plant. Only after it sent out buds did I check it out. I learned it likes a loose, fairly coarse soil with dry feet so it doesn’t get root rot. It is advised that the plant be placed on a dish with pebbles and watered that way. The cactus thrives in indirect sunlight. It appreciates being fertilized once a month between spring and fall. After its growing period it is best to give it a winter rest in a cool place with minimal watering.

Okay, what did I do that was right? Well, not much. There was no pebble-dish for my plant – I watered it when the soil on top felt dry. But its feet were probably dry because the water must have been pretty much absorbed by the time it got down there. I fertilized it when I remembered rather than on a schedule. There was no official rest period for my cactus; it remained on the windowsill all year. It got the right kind of indirect sunlight, however, as my windowsill faces north. How, I wondered, did this poor plant survive no less put out such beautiful flowers?

I remember an experiment I did with a friend. We each potted two plants, put them in the same place, and watered them equally. The only difference was that we nurtured one plant more than the other, talking to it, caressing its leaves, sending it our best wishes. Both of us found the same results, the nurtured plant thrived while the other one just maintained itself. I realize that I have been doing the same kind of nurturing with my Easter cactus, appreciating it even as I didn’t follow the prescribed care. And it thrives.

Maybe rules don’t count as much as intention. Would all people thrive if we offered them basic needs and appreciation? In our contentious world there often isn’t room for nurturing or acceptance of differences. Common wisdom for the Easter cactus wasn’t what helped the plant grow but grow and flower it did. I wish every person, in every culture, in every country be giving the liberty to thrive. It’s a good time of year for us all to blossom.
Posted by ferida at 2:05 PM 2 comments: 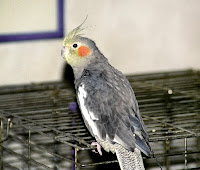 For Eloise I usually blog about what is going on around me – in my backyard, my neighborhood, places I visit and things I hear about. Today I have to blog closer to home. I may have mentioned my cockatiel Eloise. On April1, she turned twenty-two; on April 10 she passed into birdie heaven.

That is a long life for a cockatiel; most live 12-15 years though I did hear of a bird that lived to be twenty-six. We were aware that she was beginning to show signs of age. She hadn’t been flying as much lately and when she did, she often got lost and had to be rescued. Her food choices changed. She used to love vegetables (she preferred red-leaf lettuce to romaine) and fruits (she would dance back and forth on her perch when watermelon was being served) but she began to ignore anything wet or soft, favoring crunchy things. And she stopped wanting to do her usual things such as roosting on the railing of my chair in the kitchen to share my lunchtime crackers or keeping my husband company on his shoulder (she liked him best) while he read the morning newspaper. I always knew when my husband was about to come home because Eloise would chirp loudly and, sure enough, shortly thereafter he would pull into the driveway. I became aware recently that she stopped chirping at his approach.

We knew she was winding down but she was still pretty perky and interacted with us. Shortly after her birthday Eloise started to seriously decline. She was always free to leave her cage though she began to spend more time inside and when she left tried to fly, she went down to the floor and could not fly back up. My husband or I would gently lift her and she would scramble back on the bars. Eloise had always been a family-conscious bird. Even though I fed her first, she would wait until we were both seated at the table before she would dig into her own dish; suddenly she was eating before us or ignoring her food altogether. Then she started wanting to spend more time with me, a distinct shift from her fixation on my husband. She would let me gently pet her, a previous no-no, and lay her head against neck when I stood beside her cage. Her chirps changed, too. They became weaker and of a different quality, almost like a plea for me to come over and be with her, which I usually did.

On Saturday, Eloise made a sound that made me put aside what I was doing and rush over to her. She instantly stepped off the top of her cage and onto my shoulder. Then she snuggled against my neck and stayed there. It seemed to comfort her. If I moved, she moved – to get even closer. I spent much of the afternoon and all of the evening with her pressed tightly against me. At bedtime, we gently put her in her cage and said goodnight, wondering if she would be there to greet us the next day.

Eloise was down on the bottom of her cage in the morning. She had died in the wee hours by herself. I was feeling sad about her death but also about not being there when she died. But then I remembered that people often wait until they are alone before they depart. We buried her lovingly, already missing her. She had been a long-term companion. I hoped that we gave her as much as she gave us, that she felt loved and cherished during her life.

I am sure that many of ,you have loved animals or birds. Please feel free to share your stories.
Posted by ferida at 6:24 AM 8 comments:

Airplane in the Plum Tree

Last fall a neighbor’s preteen son got his toy airplane tangled up in the ornamental flowering plum tree in our front yard. I came outside to see him and three friends on my lawn shouting and throwing sticks and stones into the branches. They succeeded in dislodging lots of leaves and a couple of twigs but the plane remained in place. I didn’t want them to be disappointed but I also didn’t want my poor tree harmed. One of the boys had been vigorously climbing among the branches and the wood was bending. I did some shouting myself, demanding that the boy get down before he got hurt. Although the tree is not a sapling, it is delicate and not used to holding that kind of weight. I assured them that when my husband came home we would get out our ladder and rescue the plane. By early evening we did get the plane down and I returned it. We had been very careful not to damage the toy though I wasn’t so sure about the state of the tree after its ordeal.

Now it’s spring and the tree is beginning to blossom. There are pink buds on all the branches but there are also snapped-off edges to some of the limbs that give evidence to the fall’s trauma. Trees must have hearty souls. The Bradford Pear in the yard next door lost half of itself, a large trunk’s worth, during a storm yet it is sealed off the damage and is flowering. The township cuts large gaps in the trees that grow around utility lines and the trees, even in their truncated state, continue to send out leaves.

I respect trees. Their variety is incredible and their strength inspiring. Trees feed us and shade us and provide beauty of form, color, and perseverance. They even support housing for lots of creatures and when they are harvested, housing for us as well. I guess I needn’t have worried about my little plum tree; it can take look out for itself. But I do hope it knows that I care.
Posted by ferida at 5:57 PM No comments: