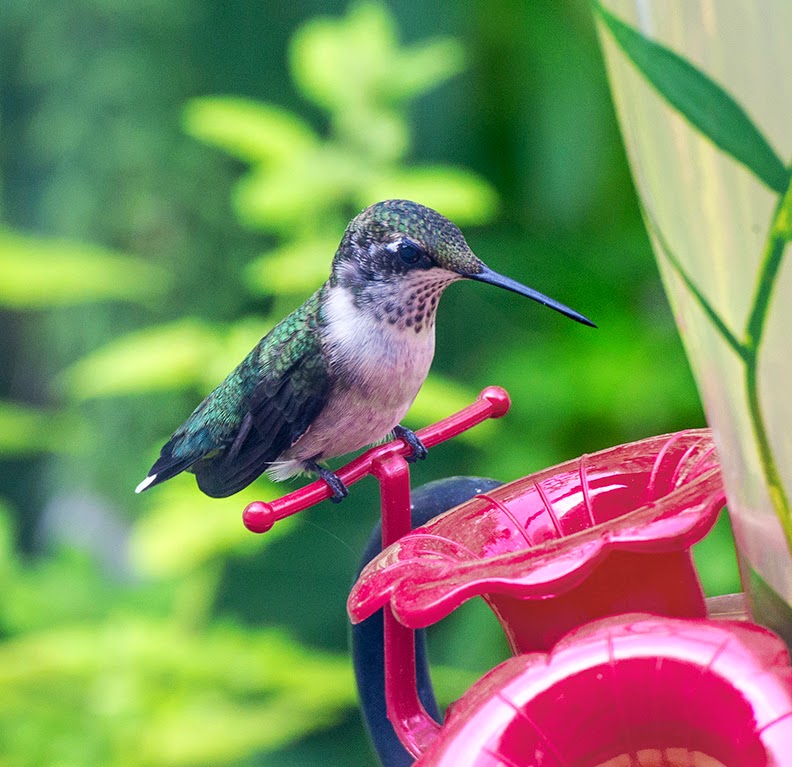 I had a hummingbird feeder sitting in my closet for a while, acquired with all good intentions of setting it out in the backyard but I didn’t get around to it last year. This summer I decided it was time. I filled the feeder with the sugar mixture hummingbirds like, put it outside my kitchen window and waited…and waited. I occasionally saw one eating from the butterfly bush but I thought they would enjoy the feeder more. Had the hummingbirds found other places to feed?

And then, there it was! There is something so exciting about seeing a hummingbird. It was tiny, only three to four-some inches, yet so beautiful.

I went on alert for sightings and discovered that they came around several times during the day. The bird uses so much energy flapping its wings that it has to eat often. And it is that flapping that gives it its name because its speed creates a hum.

I watched them all summer. I hadn’t realized that they were so territorial, chasing away other birds, even hummers, with their aggressiveness. These little beings were not easily intimidated.

Now it’s Fall. I know they will be migrating but I hope they will be back next year. I’ll make sure that I supply their food. I would hate to miss them. You never know when beauty will present itself. 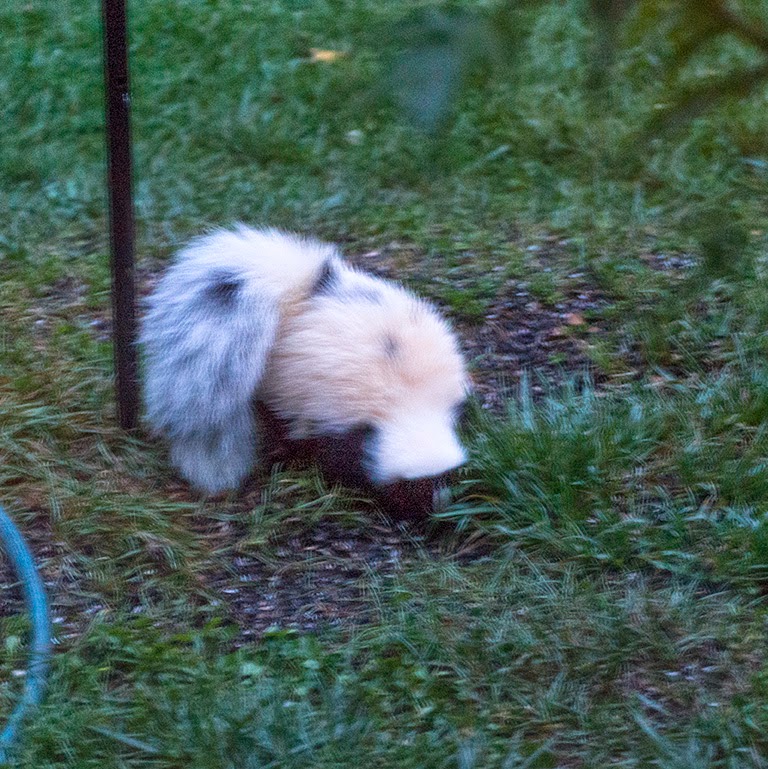 I was looking out my kitchen window as I tend to do whenever I’m preparing a meal and saw this white blob under the bird feeders. It looked like a plastic bag had blown against the pole. I debated going out and removing it or letting the wind take it on its way. Then the “bag” moved and I saw it was a skunk! A rather large one, at that. Panic set in.

We frequently smell skunks in the neighborhood so I know that are around but I had hope they weren’t too near. This dispelled that hope. Knocking on the window to scare it off didn’t work. Opening the window (ever so slightly) and yelling “Shoo!” didn’t work either. The skunk looked up for a second, then continued munching on the seeds tossed down by the less than careful birds.

I didn’t know what to do so, other than looking outside several times as dusk turned to evening, I did nothing. The skunk eventually left and did not return the next day or the next. I wondered where it lived in this well-developed suburban neighborhood. I didn’t want to come upon it accidentally should it have a nest in back of our yard.

The thing is, skunks are actually cute. They are also mild-mannered except when threatened. They benefit farmers by eating agricultural and garden pests. And they are mostly nocturnal so they tend not (too often) to interact with people and animals.

Much as I am nervous about its reappearance, the skunk reminded me of the diversity of nature. There are helpful creatures, dangerous creatures, worrisome and delightful creatures. Sort of like us. All of nature has different aspects about it that make life interesting. Some we like, some not. It’s a matter of the good, the bad, and (in this case) the smelly.

If you do get sprayed, try these de-skunking methods:
http://pestcontrol.about.com/od/diyanimalcontrol/a/Get-Rid-Of-Skunk-Odor-Myths-And-Facts.htm
Posted by ferida at 7:37 AM 1 comment: 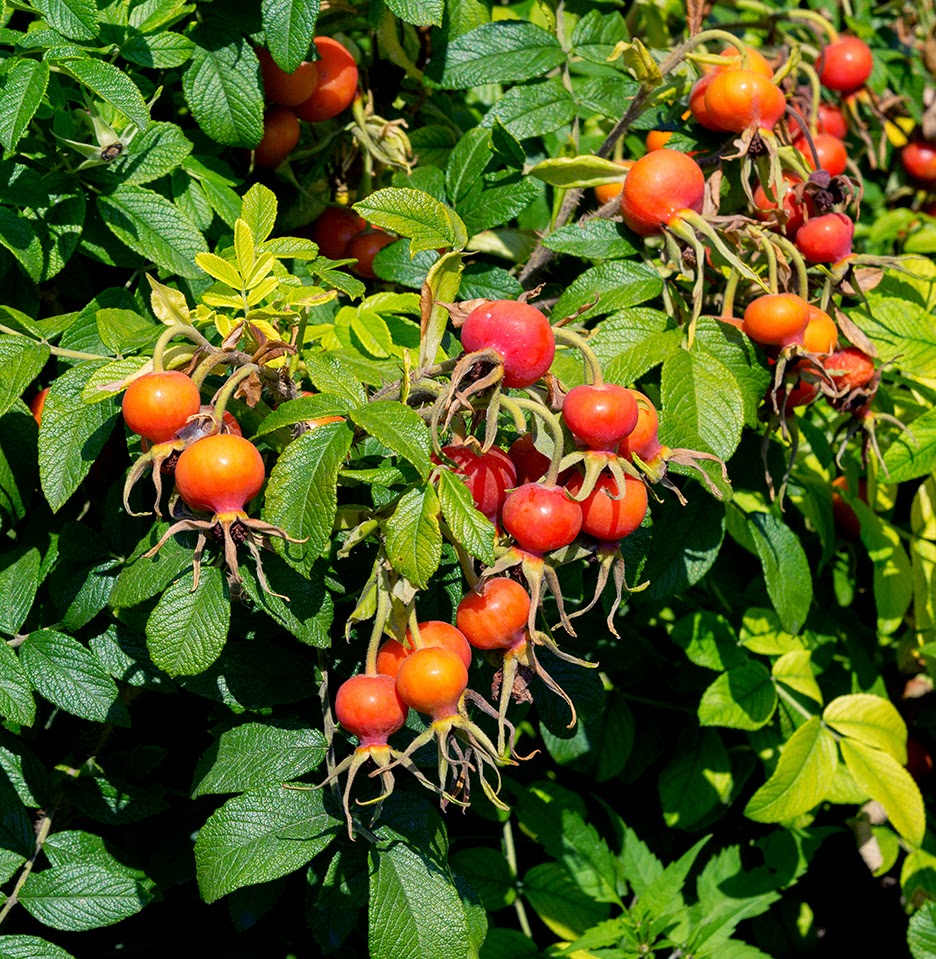 I was walking along a path in Acadia National Park at Bar Harbor, Maine, enjoying being out in nature when I heard someone say, “Are those tomatoes?” I looked to where she was pointing and smiled.

She was referring to the rose hips, which are the seeds of roses. They are red and have a slightly flattened roundness that could be mistaken for hefty cherry tomatoes. They are abundant at this time of the season, ripening as autumn approaches.

Rose hips have a long history of usage, from birds and animals to humans. They are edible, though we humans cannot comfortably digest the seeds; they can be easily removed. They are rich in Vitamin C and other vitamins and antioxidants. Fall is a particularly good time to harvest them as they become sweeter after the first frost. They can be used topically to heal skin problems.

But I didn’t let my focus on rose hips distract me from the splendor of Acadia. It is magnificent. The mountain views and seascapes are meditative. Many people, myself included, sat on the rocks just looking outward. Time seems irrelevant in such a setting. It is a place of renewal, something necessary in today’s frenetic world. If you can’t get to Acadia, take a few minutes in your day just to close your eyes and breathe deeply. It really makes a difference.

This is the official Acadia website but Google other sites as well for some additional great photos:
http://www.nps.gov/acad/naturescience/index.htm

A brief review of rose hips with some recipes:
http://wildfoodsandmedicines.com/rosehips/
Posted by ferida at 3:03 PM 9 comments: