This week I was at a unique site called Storm King Art Center in the Hudson River Valley, about an hour north of New York City. It is a 500-plus acre sculpture park and museum that features a permanent collection of works by a variety of masters such as Alexander Calder, Barbara Hepworth, Jeff Koons, and Roy Lichtenstein. A main feature is thirteen large sculptures by David Smith, placed around the grounds, and there are some magnificent works by Alexander Liberman.

The museum has nine galleries in a chateau-style building with windows that allow the outside to be part of the display. Large sculptures are integrated into the landscape of lawns, fields, hills, and forests, making every view a combination of art and nature. Maya Lin used the land itself in “Storm King Wavefield” to create a sculpture of seven wavy hills that generate a sense of movement and flow. Andy Goldsworthy wound an elegant stone wall through the woods. It is hard to resist the urge to feel the texture of the materials used and to move amid the various forms; alas, there is a no touch, no climb rule.

Mother Nature adds spectacularly artful panoramas at every turn. A broad expanse of meadows leads the eye to green hills and a cloud-flecked sky that provide a perfect backdrop for trees, artistic forms, birds, and dreams. It is hard not to be engaged with the site. It is a call to reconnect with one’s inner self through the art of man and the glory of nature

For a brief overview of Storm King and links to some artists:
http://www.infoplease.com/encyclopedia/entertainment/storm-king-art-center.html#ixzz2TqH6Q5i0

For photos of the sculptures:
http://www.tripadvisor.com/LocationPhotos-g48220-d105830-Storm_King_Art_Center-Mountainville_Cornwall_New_York.html
Posted by ferida at 11:17 AM 3 comments: 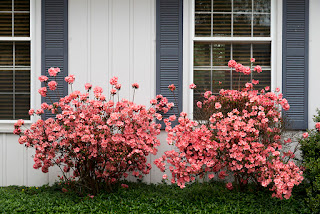 Last year the azaleas in front of our house bloomed in nice, neat, round bushes, as they have for years. They gave the entrance a pleasing and colorful approach. Most of the other azalea bushes in the neighborhood behaved in a similar way. They were polite. Refined. At the end of the season, I pruned the bushes to remove some dead branches, being careful about pruning off the buds that are laid down after the plants bloom. I expected another year of dignified flowering.

This year they flowered, right on schedule, sending out their customary peachy blossoms. Only something changed. The bushes became exuberant! They shot out beyond their customary shape and reached for the sun. There is no restraint here. I had never seen anything like it.

Each time I think I should do something about the wildness, I end up smiling instead. When I come home, I have to stop for a minute to enjoy the fullness of the bushes and the in-your-face burst of flowers before going inside. My friend, coming to visit, stood dumbfounded when she saw the azaleas.  “They don’t usually grow like that,” she said. Certainly not in suburban gardens. Then she said something about them fitting in with my energy.

That got me thinking. There are thousands of varieties of azaleas, with different colors, heights, petals, and growing patterns - in their own particular way. There are billions of people expressing themselves in their own particular ways. And why not? There is energy in diversity.  If we can tolerate, even desire, variety in Mother Nature then why not in human nature, too?  There may be surprises, sometimes problems, but most often there is dynamic growth.

For FAQ and in-depth answers, try the Azalea Society of America’s website:
http://azaleas.org/newsite/faq.php#poi
Posted by ferida at 1:56 PM 2 comments: 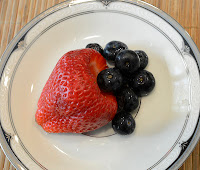 I love strawberries. They usually are small to medium in size but the package I just bought has huge berries! Not only are they big but they are yummy, too. What a Spring treat.

Which leads me to a distressing subject – the quality of our food. Strawberries are on “The Dirty Dozen” list. So are cherries, grapes, spinach and potatoes, among others. This list indicates that certain fruits and vegetables retain the highest levels of pesticides.

Other than growing our own produce, what can we do to get the best quality food for our families? Well, I buy mostly organic. What does organic mean? According to the USDA Consumer Brochure: Organic Food Standards and Labels: The Facts, “Organic food is produced by farmers who emphasize the use of renewable resources and the conservation of soil and water to enhance environmental quality for future generations…Organic food is produced without using most conventional pesticides; fertilizers made with synthetic ingredients or sewage sludge; bioengineering; or ionizing radiation.”

While there is no way to guarantee that organic food will be pesticide free (considering the air, water, and soil quality), at least we can support programs that attempt to produce food without adding chemicals into the process.

I tend to buy organic, especially of the most pesticide-susceptible foods. More stores, even the larger supermarkets, are carrying organic products now. But the choice is ours to make. I see organic farming as not only offering us healthy foods but also as supporting our planet. These strawberries are a responsible – and delicious - example of what can be produced.

Check out “The Dirty Dozen” and find some safer produce items:
http://www.ewg.org/foodnews/summary.php

If you want more detailed (and somewhat scary) info:
http://www.whatsonmyfood.org/
Posted by ferida at 8:40 AM No comments: