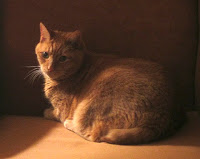 If you want to know more about cerebellar hypoplasia check out this website: http://www.helium.com/items/1412679-cerebellar-hypoplasia-in-cats-causes-and-symptoms
Posted by ferida at 11:05 AM 1 comment: 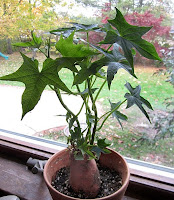 One day, about a month ago, I discovered that a sweet potato I had overlooked in my pantry was beginning to sprout. I remembered how long ago my friend had put toothpicks into a potato she was trying to grow and placed it in a glass of water. I decided to see if this potato would grow. So I plunked it into water – no toothpicks, no fanfare - and put it on my kitchen windowsill.

Almost immediately it started putting out new shoots. The stems presented beautiful oak-like leaves. The roots, thin, white, and thready, circled the bottom of the glass. Each day more leaves came out and turned toward the light. The sweet potato soon became too cramped in its small container so I planted it in a pot with what soil I happened to have handy. And then it really took off! What exuberance!

Now I am getting ready for Thanksgiving and while in the store I bought sweet potatoes. I will cook them on the holiday and savor their delicious sweet taste. At the same time I will be taking delight in the potato I will not cook. One feeds the body, the other the spirit. I haven’t planted veggies in my yard for several years because of the squirrels but perhaps it is time to think about doing it again. Then I will have both kinds of sustenance. Meanwhile, I will enjoy my windowsill sweet potato as it expresses its joyful self.

If you would like to grow sweet potatoes this link should help: http://www.tropicalpermaculture.com/growing-sweet-potatoes.html 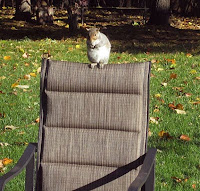 We feed the birds but they are not the neatest eaters around so some of what goes into the feeders ends up on the ground. Nothing is wasted, however, because the squirrels make short work of the dropped seeds. Squirrels are hearty eaters though mostly vegetarian. They dine on seeds, nuts, fruits, and vegetation. I personally can attest to them liking green peppers, lettuce, green beans, herbs, and just about anything else I choose to plant in my garden. They also seem to be pleased with the uneaten dry cereal I toss out from my cockatiel’s food dishes.

This season has been warmer than usual so there has been more to munch on. The acorn crop has run its course but there were tons of them for the squirrels to bury and store away for the hard winter months.

So why is this chubby little critter peeking in my window like Oliver Twist with a pathetic “more, please” demeanor? It doesn’t look in the least malnourished. It is somewhat disconcerting to be stared at so pitiably while my husband and I eat our lunch. Hasn’t the word been passed along through the generations that I won’t forget him or his family or friends (birds included) when there is snow on the ground?
I guess it is instinctual to worry about where one’s next meal is coming from. There certainly are enough people in our world who can’t be sure of that. I push back my chair, gather the can where I keep the bird’s leftovers, and go out back. As soon as I open the door the squirrel hightails it across the yard and up the tulip tree. I spread the cereal beneath the feeders in case some birds would like to snack on something different, and go back inside. Before I resume lunch I look out and see a squirrel busily munching away. Is it the same one? Does it matter? As my grandmother used to say whenever anyone, expected or not, showed up at her door, “Come. Eat.”
Posted by ferida at 1:35 PM 1 comment:

There are some times when words aren’t big enough to wrap around what you are feeling. So let me describe what I was seeing instead.

I was out for a Fall day at the shore with my husband. Each shore has its own personality, its particular color of sand, the variety of things that wash up with the tide. This shore was at Gateway National Recreation Area in Staten Island, New York. It was mostly empty of people – except for a man and his son playing frisbee and the fisherman who caught something beautiful and large along the shoreline – and us. The beach had a jagged line of rocks and shells where the tide sweeps in and tumbles out again. It also had bits of glass that glinted against the flat, tan sand. I picked up green, white, and brown fragments that had been scoured smooth by the sea. It was hard to believe that they had once been bottles tossed away as trash and are now reclaimed as art by nature.

As we walked along the gulls toddled ahead of us. They seemed to have a definite space that they preferred not to have infringed upon. If we got too close, they would take off in a progressive flap of wings and land a little further along the beach.

The sky kept drawing my attention. It was incredibly big, not that it isn’t always, but the clouds dramatized the sense of its vastness. I couldn’t help gaping. It definitely had the WOW factor. Every now and then a single gull would fly off from the group and balance on the breeze. It looked small against that immense backdrop. Then, again, so did I; a valuable perspective to remember when I get too involved with myself. What a wonderful, enriching way to spend a day!
I would love to hear about are other exhilarating encounters with nature. Do you have any you'd like to share?
Posted by ferida at 10:55 AM 1 comment: 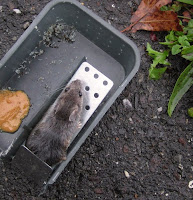 I was planning to write about something else today but so many people have contacted me about my mouse problem recently that I thought an update was needed. So…let me introduce you to the mouse. Actually, this is mouse number three. We have had four to date. Each got a personal ride to a field surrounded by woods. They all took off like a bullet train the second they realized they were free from the trap.

I found out that the word mouse comes from a Sanskrit word that means thief. Totally understandable. We found a hunk of bread that had fallen from our bird’s cage in a cabinet near the fireplace. There were droppings there, too. We could locate the traps along the droppings trail. As mice are known to return to their surroundings, following the same path, I asked my husband, the mouse releaser and photographer, if it were possible we were trapping the same mouse.

He said one was small, another bigger, one black another mottled. Even mice have their own individual physical characteristics.

There was no mouse in the house this morning. We aren’t removing the traps any time soon, though, not until we have lots of mouse-free days. Our experience has been educational, I must say, and productive. I had been meaning to reorganize that cabinet for some time but just hadn’t gotten to it. And the pantry got a good cleaning. Quite a motivational prompting for something that weighs barely an ounce.


If you feel motivated to know more, here are some mouse facts:
www.buzzle.com/articles/facts-about-mice.html
http://a-z-animals.com/animals/mouse/
http://www.humanemousetrap.info/mouse-facts/
Do you have any mouse stories you’d like to share?