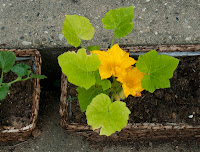 I love this season. It’s exciting to see the vegetable plants starting to sprout. They express themselves so beautifully, even in our makeshift garden. They don’t seem to be bothered that we have so little space for them – only our small side yard has the needed hours of sunlight. So we grow one or two plants wherever we can fit them, starting vines in pots and letting them reach out across the lawn.

On one of our recent trips to the nursery, we were attracted to the squash seedlings. There are so many squash varieties that it is almost impossible not to find one that appeals. They tend to be fast growers, good for those of us who are impatient for home-grown goodness. We put in a couple of Yellow Straightneck plants and now there are flowers bursting into bloom. Underneath we can see the beginnings of the veggies. I understand that it is best to pick them when they are about six-inches, not too large. When the light yellow turns to darker yellow they are over-mature and the plant slows down its production so it pays to be ready when the squash is.

Squash is nutritious and delicious. I am already thinking of recipes – sautéed with chopped scallions, some sliced mushrooms, and a dash of apple cider vinegar perhaps, or maybe sliced lengthwise, brushed with a little extra virgin olive oil, sprinkled with fresh basil (I love basil), and baked, or just plain steamed - all good.

I am enjoying the process, seeing the leaves and flowers unfold, checking on the daily growth of the veggies; whatever we get to eat is a bonus. For me this is dabbling in a mini-farming adventure but it has helped me to appreciate the true farmers of the world.

Extensive info about summer squash:
http://urbanext.illinois.edu/veggies/ssquash.cfm
and do click on the link for Basic Gardening – it will get you off to a great start!
Posted by ferida at 6:50 PM 2 comments: 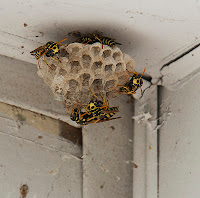 Okay, so here’s the thing – we have a wasp’s nest tucked into the crook of our garage door where it meets the house. As we enter or leave we have the insects in plain sight and often very close. The nest is getting bigger since we saw it a few days ago. We have to do something.

Wasps are actually beneficial in that they eat a lot of other bugs but they are dangerous so near to people. They will sting if they feel threatened, which is understandable - but not acceptable at a busy threshold. Stings are painful (I know from prior experience), starting with the sharp incision of the stinger. The injected venom stimulates the nerve endings of pain receptors in the skin. Then the body releases a fluid to the site to wash away the venom, which spreads it and causes redness and swelling around the sting area. Not fun. And not something to play around with. Some people are allergic to stings. Anaphylaxis can cause minor irritations such as hives, swelling, nausea, vomiting, abdominal cramps, and headaches. More severe reactions such as shock, dizziness, unconsciousness, or difficulty breathing need immediate attention as they can be life-threatening.

I tend to be reluctant to harm anything in this world; I capture and release spiders found in the house rather than kill them, shoo flies out the window, discourage ants by spreading ground pepper at their points of entry. If this nest were anywhere else I would probably let it be but wasps and people are not compatible so close to each other. It is dangerous here; the nest must go. I hope the next time the local wasps want to build a nest they find a more suitable place.

More than I wanted to know about wasps but helpful, especially regarding wasp management:
http://www.ipm.ucdavis.edu/PMG/PESTNOTES/pn7450.html
A gentler perspective:
http://www.angelfire.com/ok3/vespids/intro.html
Posted by ferida at 7:54 AM No comments: