It snowed again, a beautiful powdery fluff that made everything seem so pristine. I did what was needed, shoveling the front drive and relieving the cars from their white burden. As I was working I heard the birds around me  – a woodpecker knocking on the trunk of a tree, the frantic chirping of the finches as they rushed in and out of the forsythia bush, geese chatting overhead as they made their way south in a long vee. What I didn’t hear was something that was happening in the backyard.

There were no birds on the feeders, a rather unusual occurrence for the time of day, especially during a snowy day when food is harder to find. They had been there earlier in the day, flitting back and forth between mouthfuls of seed. A mourning dove had joined them and was quietly cooing. Now there was silence. Hmmm.

Then I knew why. Toward the back of the yard was a large bird – a hawk! It was on the snow, pecking at something. By the look of the feathers underneath its feet, the mourning dove was its meal. Poor thing.

Nature can seem cruel at times but then everything has to eat. In the natural scheme of things, there is something for everyone. It is when part of nature becomes greedy that cruelty comes in. Animals that are forced out of their natural habitat must find a source of food. WHYY has been presenting a series by M. Sanjayan called A New Wild about the interaction of people and animals. It is worth seeing and, even more so, contemplating our impact on this incredible earth.

An interview with M. Sanjayan:
http://blog.conservation.org/2015/02/why-i-made-earth-a-new-wild/
Posted by ferida at 4:54 PM No comments: 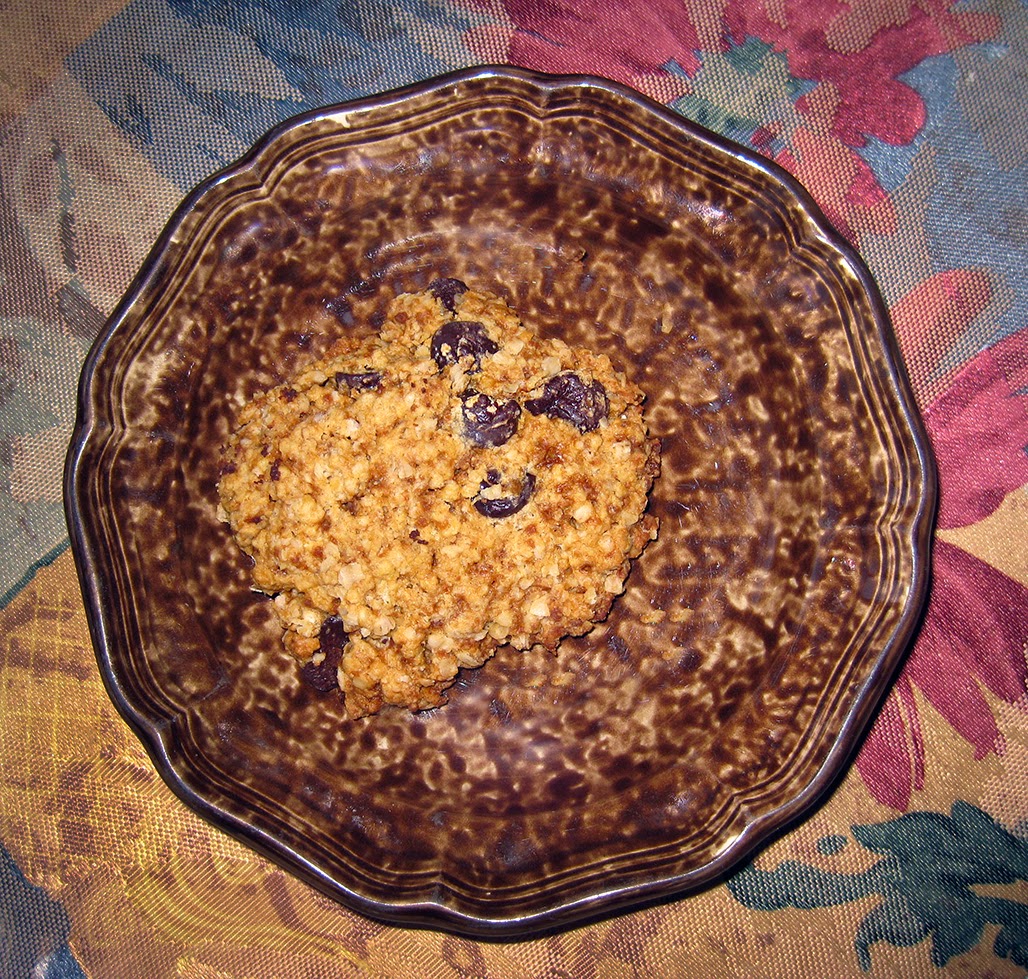 Let me start off by saying it’s winter, just in case you forgot. It’s cold, often snowy (especially if you live in the northeast), and not particularly inviting to be outside. The birds on the feeders stay only as long as they can eat their fill and then scoot away to their hidden nests. The squirrels are grumpy, chasing each other away from the limited supply of frozen meals. There are no flowers brightening up the neighborhood.

So I huddle inside, fire up the oven and bake!

This week I made what look like camouflage cookies; they blend in so well on my plates that it is easy to pretend the plate is empty and have another cookie. They are actually oatmeal chocolate chip cookies that are hearty, chewy and delicious. I followed a recipe but did what I usually do, that is I make changes as I go along. For instance, I use coconut sugar instead of granulated. None of my creations look fancy like the creations on The British Baking Show on PBS (Sunday at 8 PM in New Jersey), a show I enjoy watching. Several bakers make three assigned creations each week. At the end of the show, one baker is let go. I couldn’t compete like that. My baking is for home consumption, for family and friends only.

I actually like winter. When I have to go out, I bundle up and feel adventurous. Then I return and appreciate the warm comfort of the indoors. I know spring will be here soon enough and I will be spending less time baking as I plan my garden. But for now, I will blend in with the season, enjoy my baking, and look forward to what each season brings.