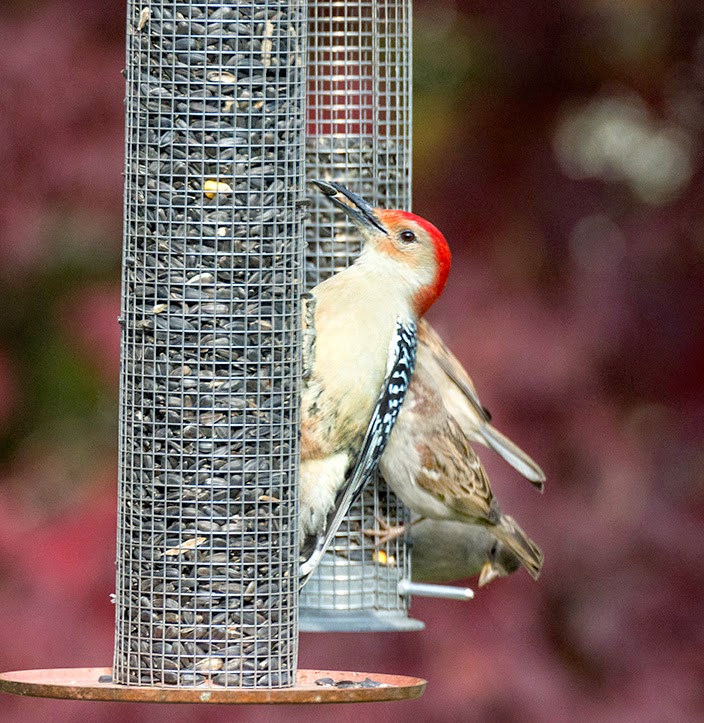 The woodpeckers found us again this year. It’s a treat to see them. We have a male and female munching on the black oil sunflower seeds. They are a nice size and lovely to look at.

I used to think that all woodpeckers only came in the Woody Woodpecker persona but that was incorrect; woodpeckers come in lots of variations. I believe our kind is a Northern Flicker. I know that dedicated birdwatchers need to identify what birds they see but I am not obsessed with identification. It’s the visual aspect of bird watching that gets me. I don’t have a life list of birds, either, documenting the birds I see in my travels though I have been privileged to see many different kinds. A birder likes to observe birds in their natural habitats. My backyard may not qualify as natural because when I put out seed for the birds, it automatically changes the environment. I say that the birds will find food wherever it is so why not in our backyard? I’m pretty accepting of whichever birds show up.

I’m sort of like that with people, too. I am always impressed with how much variety there is in humanity. It’s amazing to think that the category of person can come in so many sizes, colors, shapes, and individual details. Like the birds, each person has his or her own characteristics and personality. Pretty remarkable, I say, whether bird or person. And inspiring, too, that our world can support so much diversity, as long as we value it.

Squirrel – Master of All He/She Surveys 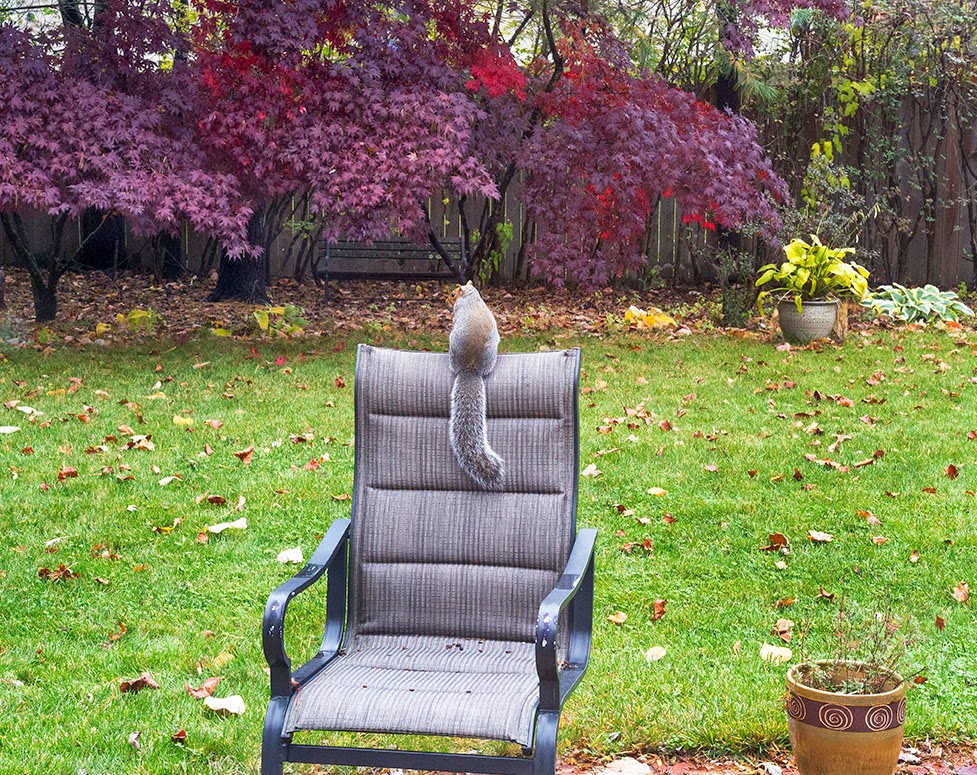 Squirrel – Master of All He/She Surveys

For some reason, the squirrels like to sit on our patio chairs. Usually they sprawl flat out along the top or laze quite comfortably on the seat. They are aware of the people who live in the house but we don’t seem to bother them unless we open the door and chase them away.

This time a squirrel was upright on the back of the chair, facing the yard. He (or was it she?) knew we were watching but it did not bother him. He was relaxed and seemed to be taking in “his” property, observing the colors of the leaves, the birds as they flew on and off the feeders, the other squirrels zipping along the ground around him. He had the look of being master of all he surveys. We didn’t have the heart to shoo him off.

We have lots of squirrels in our backyard. They make nests in the trees, eat the seeds that drop from the feeders and sometimes find a way to get around the baffles and onto the feeders themselves. They chase each other during breeding season, run strangers away, or sometimes they scrabble just for fun. We complain that they share too many of our vegetables and use our patio for their own social gatherings. Occasionally, one will look in our kitchen window and stare at our table as we eat. We can almost hear the question, So, what’s for dinner?

This was different, however. The squirrel wasn’t looking for handouts. He wasn’t in breeding mode or protecting his turf. There was a peacefulness about him, unusual for a creature who seems constantly active. The squirrel’s tail stretched long and rested down the chair’s back, not twitching like I was used to seeing.

He/she stayed there for quite a while. I was transfixed with every turn of the creature’s head. There was something sacred about the scene. Did the squirrel feel connected with what he was seeing? Once, he turned and looked toward the glass door through which we were watching but did not register any fright or inclination to scoot away, then turned back and continued what now seemed like a vigil.

I couldn’t tell if the squirrel was owning what he/she saw or being embraced by it. It didn’t matter. As I watched, I felt a connection – to the squirrel, to what was being observed, to the larger sense of nature. Suddenly everything seemed new.  It was a broadening experience propelled from a very simple cause. It made me aware that the world is always different, depending upon one’s view.

I turned away before the squirrel did. In the morning, the backyard was once again bustling with activity. I couldn’t tell which squirrel was the philosopher but I could appreciate the idea that everyone, whatever our size, has a personal perspective to offer.

An overview of the Eastern Gray Squirrel:
http://www.fcps.edu/islandcreekes/ecology/eastern_gray_squirrel.htm

Posted by ferida at 5:39 PM No comments: 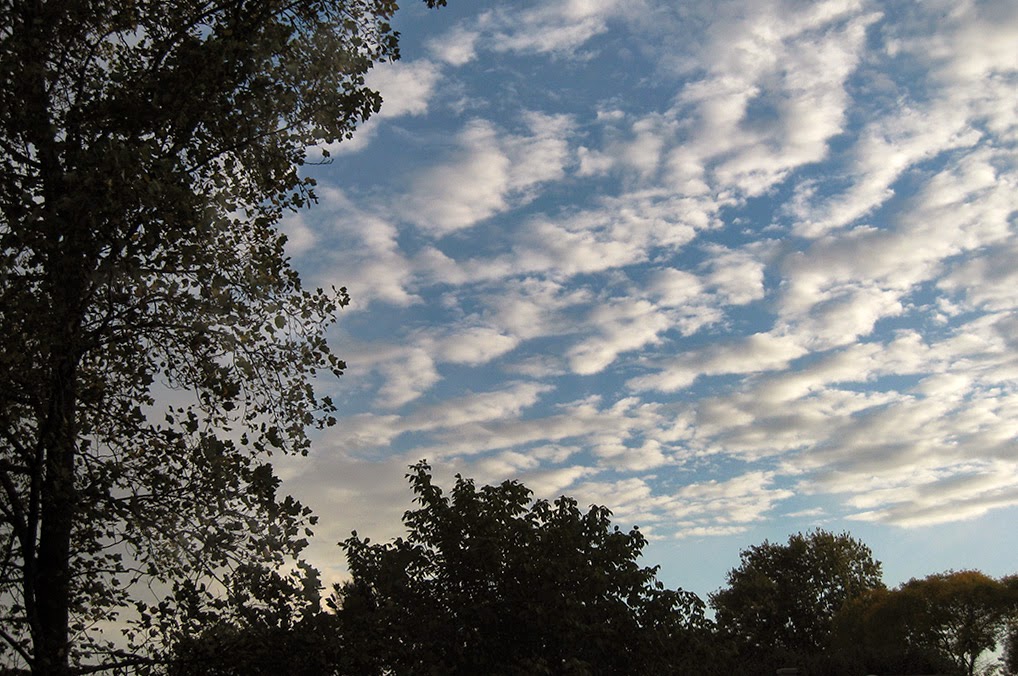 I am not a morning person. It takes me a while to gather my energy so much of breakfast preparation takes place automatically. It’s a good thing oatmeal doesn’t need special attention.

Having said that, I am often startled out of my lethargy when I look out the kitchen window. Sometimes a new bird will surprise me or a flower that planted itself will suddenly appear. This time it was the sky that did it.

The trees were just awakening themselves, their leaves barely hanging on in mid-season. They seemed to be framing something that drew my eyes upward. Just above and beyond them was an exuberance of white clouds. It woke me up right away. I sensed myself being drawn upward into the vastness of the sky. How much larger I felt!

Clouds often represent things depending on their form. The lighter ones tend to be associated with air and movement, higher thought, expansion and enlightenment. The darker ones are seen as more related grief or omens of change. But whatever the symbolism, there is always movement involved. Clouds are not indicative of the past; they exist in the present.

I wasn’t seeking the clouds’ meaning in the morning but I responded to their presence. They moved along at a slow pace, inviting me to dream along with them. And so I did for the rest of the day, making up my own symbolic definition of infinity, allowing myself to bask in their, and my connection with all of nature.

Chinese symbolism:
http://www.nationsonline.org/oneworld/Chinese_Customs/clouds.htm
Posted by ferida at 10:44 AM 2 comments: