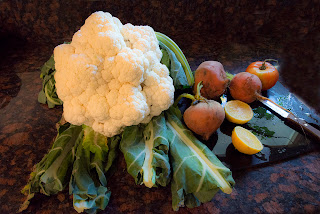 Harvest time provided delightful veggies this year. There were cauliflowers bigger than dinner plates, broccoli heads that challenged them, zucchini from the size of small cucumbers to large gourds, red beets and yellow beets, tomatoes of all sizes, colors, and shapes.

We are fortunate to have access to local farms where I live. The farmer’s markets abound with produce and the supermarkets try to offer as much local fare as the season will allow. Organic is becoming more available and when on sale will often equal the price of non-organic goods.

Lots of cities celebrate the fall harvest with festivals, antique auto events, arts and crafts fairs, 5k races, swim meets, wine tastings, apple picking, hay rides, you name it. It is a time to appreciate the labor that went into producing the food we place on our tables and to acknowledge the change of seasons.

But let’s not forget how fragile the land that is the basis of this bounty can be. The recent Typhoon Haiyan in the Philippines, besides being so deadly and destructive, played pick-up sticks with the coconut palms, laying them flat, their roots in the air. In 2012, the corn crop, which was headed toward a bumper year, was caught in a heat wave that greatly reduced its potential and with less corn to sell, prices rose.

It’s a reminder to not take it all for granted. We need to tend to
the land in a more nurturing way and to be more responsible about how we affect the climate so that we may have many more fall harvests to celebrate.

A look at what may be limiting our future celebrations:
http://www.nytimes.com/2013/11/12/science/earth/warning-on-global-food-supply.html?_r=0
Posted by ferida at 8:12 PM No comments: 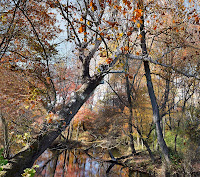 I was out at a local park this weekend, enjoying a walk in the autumn woods. The leaves were brilliantly backlit with the afternoon sun; the variations of red and gold were breathtaking. Some leaves were still green, holding onto their branches as hard as they could, while others had already turned brown and blew off with the slightest breeze.
There was a creek that reflected the shapes and colors of the sunken leaves and with the movement of the water, the scene looked like an impressionist painting. Very inspiring.

Standing on the bridge, overlooking the water, I saw something even more
inspiring. There were two trees at the edge of the creek, holding onto their footing
where the earth slipped into the water. Their balance seemed precarious, as half their
roots were not anchored.

But as I looked up into the high branches, I saw that the trees were leaning

inward, toward each other. One trunk, that of the thinner tree, rested in the crook of the branches of the other tree, and further up, the heavier tree was held in place by the higher branches of the thinner one. I could almost imagine these trees being best friends, reaching out and helping each other when times got tough. And because they were doing so, they both were able to survive.
If trees can do that, I would hope that people could, too. Perhaps by
helping someone else we might find that we are being supported as well. As I said, it was
all very inspiring.

If you happen to be near Medford, New Jersey, take a peek at the park;
http://www.njwildlifetrails.org/PineBarrensTrails/Sites/tabid/1698/Scope/site/Guide/PINEBARREN/Site/272/Default.aspx
Posted by ferida at 6:05 PM No comments: