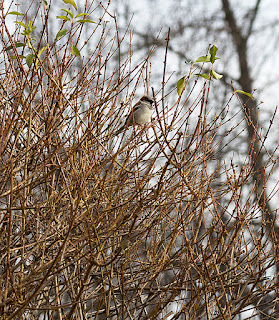 In the summer our forsythia bush is green and full, creating a private nesting environment for a host of our local House Finches. They are the little birds that flock around the feeders and serenade us with song.

The bush is pretty bare, now that winter has arrived. A few leaves are hanging on in homage to the warm weather we had this fall but otherwise it would not seem to be a particularly good place for protective covering. Yet the finches find it to be a good spot to hang out.

And it is understandable. Look at the forsythia’s winter coloring, all grays and browns, perfect blend for a finch. At least for the female House Finch. Male House Finches are more colorful, with splashes of red feathers on their heads and chest. But even so, the inside of the bush is a tangle of branches, easy enough for such a small bird to move through but hard for a larger bird, such as the predatory hawk that has been hovering around the treetops recently, to navigate. It seems that the bush’s qualities are just fine for finches. They come out when they choose and hunker in when they need to.
And perhaps that is a quality we humans should cultivate. It is wonderful to be out in the open, to show the world our best, our beauty, our skills. Then there are times for introspection. This year has been rough with storms, with guns, with political stagnation.

Let’s make next year safer. Let’s be proactive in the face of natural threats. Let’s be protective of our public spaces. Let’s work together for the good of all. Let’s make 2013 a year of cooperation and caring so that we can sing our own beautiful songs.

Listen to the finches:
http://www.birdjam.com/birdsong.php?id=15

Some finch facts:
http://www.thegalenaterritory.com/viewpage.cfm?id=221
Posted by ferida at 11:20 AM No comments:

The Common and Uncommon Nuthatch 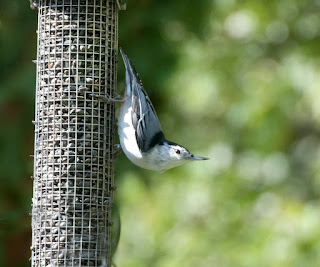 The Common and Uncommon Nuthatch

The White-breasted Nuthatch is a fairly common bird. It has ordinary coloring – black and gray with white underparts – and is small, about the size of a sparrow. It frequents woodlands and deciduous forests like the Black-capped Chickadee. It makes its nest in tree hollows like the woodpecker and, also like the woodpecker, has an undulating flying pattern. It eats insects and seeds (particularly sunflower seeds) like so many other birds. So what makes this bird unique?

It’s an upside-down creature most of the time while other birds have more of a rightside-up personality. The Nuthatch is the only bird that regularly starts at the top of the tree (or birdfeeder) and works its way down as it seeks its food. There is an advantage to going downward; the bird is able to see food overlooked by the usual upward direction of other birds.

And that is what speaks to me. What causes this one bird, who is like other birds in lots of ways, to do something different when it would be so easy to do what the rest of the bird world does?

It is intriguing to see what the natural world offers as mirrors. This simple example makes me think of us, the human species, and how we have so many commonalities – in culture, in peer groups, in professions, in fashions, etc. – that make it almost inevitable that we be the same. Like the Nuthatch, however, we may have to deviate from the usual to find what nourishes us, what distinguishes us as individuals. And it is that something that helps us to express our true, particular nature within the broader spectrum of humanity.

Here is a general introduction to the Nuthatch and for more specific information about the White-breasted Nuthatch, click on the link at the left.
http://www.birdnature.com/nutmain.html
Posted by ferida at 2:03 PM No comments: 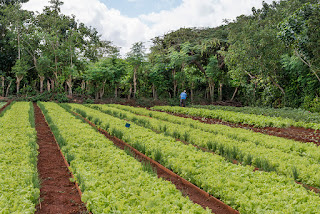 My backyard really expanded last week – all the way to Cuba! We had the opportunity to visit the island that is so close to us, a mere ninety miles from Miami, and yet so far from our ability to interact, at least until recently. We went with Grand Circle Foundation, one of the licensed groups that lead people-to-people cultural exchange tours. What we found was a resourceful culture, friendly people, and music that enlivens everything.

Much of what you see is reflective of the 1950s (oh, those cars!) when Cuba was a booming tourist destination. But all was not well in the coastal paradise. There was a large class discrepancy. In 1959, Fidel Castro ousted Batista who, when it looked like he would be voted out of power, had taken over total control of the government. Most privately owned businesses and properties became state-owned. Cuba became aligned with the Soviet Union and communism and estranged from the United States. This relationship lasted until the USSR was officially dissolved in 1991. The dissolution left Cuba in crisis. Without the economic support the USSR had provided, food was scarce and poverty reigned.

Cuba is still struggling. There are remnants of functional Soviet architecture but also of the grander architectural styles that came with Spanish colonization. Much of that, unfortunately, is in need of repair, which is too costly for most Cubans. Buildings occasionally fall down, sometimes with the people in them. Many of the buildings have black mold on them, something that is hard to control in such a humid climate.

Cuba’s new leader Raul Castro, Fidel’s brother, is beginning to loosen some restrictions. We visited a cooperative organic farm. The land is still state owned but the produce can be sold privately. We ate in a few paladars, small, privately owned restaurants located in homes. They provide a chance to practice both Spanish and English, depending on which side of the menu you’re on. Our tour was busy but it left us time to wander the cities and interact with local residents who are eager to connect.

And yes, we did see nature in various forms. We saw cranes looking for lunch in Cienfuegos, a city that is a UNESCO World Heritage Site. We visited a family that owns a tobacco farm where there was a variety of livestock, lots of chickens and a rooster who was intent on getting us to feed him some of the bananas we were eating (there were three delicious local varieties). We went through a nature preserve and learned about trees that are native, and some invasive, to Cuba. There was el malacon, the miles-long promenade in Havana, a great place to see the harbor and a popular venue to stroll along.

We did not cover the whole island. We did not – yet – get to the Vinales Valley, another UNESCO World Heritage Site, or to the many beaches that made Cuba a major vacation spot. To get a general overview of the natural diversity of Cuba, look at photographer Steve Winter’s video http://ngm.nationalgeographic.com/ngm/0311/sights_n_sounds/media2.html.  He spent five months there for National Geographic Magazine and his photographs will give you some idea of the depth and beauty of Cuba.

One day perhaps, sooner rather than later I hope, our countries will be able to set aside our former antagonisms and re-establish relations. The people-to-people concept where we have personal, positive interactions with each other is a good way to help facilitate the process. As the world becomes a more global neighborhood, can we continue to ignore Cuba today, our next-door neighbor?  Should we?

Frommer’s gives a brief description of some natural attractions:
http://www.frommers.com/destinations/cuba/3173020137.html
And for history buffs, a timeline of Cuba’s history:
http://news.bbc.co.uk/2/hi/americas/1203355.stm
Posted by ferida at 6:28 AM 1 comment: