Bald Eagles are Back! 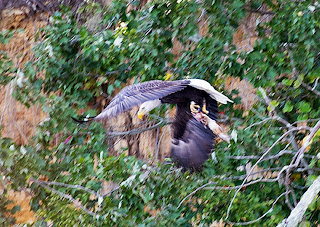 Bald Eagles are Back!

I see many birds in my backyard, even some large ones like crows, hawks, ducks and the occasional turkey vulture. Bald eagles, however, are not among them. This weekend I took a mini-cruise on the Maurice River in NJ and had the opportunity to spot eagles galore. Some were on their nests, others were perched on the bare wood of trees along the banks of the river. The eagle here (click on the photo to enlarge it) had caught a fish and was flying off with it. The bird landed on a branch and proceeded to enjoy its meal.

The bald eagle, our national symbol, was once in trouble. A combination of land development, destroyed habitat, and hunting threatened to destroy the eagle population. Some claimed that the pesticides like DDT were responsible for thinning the birds’ eggshells and contaminating fish and water supplies. The population had gone from 100,000 nesting pairs to only 487 in 1963. DDT was banned in 1972 and on July 4, 1976, the US Fish and Wildlife Service officially listed the bald eagle as a national endangered species.

Since then the eagle population has rebounded. On June 28, 2007, the Department of the Interior announced the recovery of our nation’s symbol and removal from the list of threatened and endangered species. There are now over 9,700 nesting pairs in the U.S. Quite a comeback.

Seeing a bald eagle is thrilling. It has a presence. It also has a right to be here, as much as we do. We really do need to be more sensitive to our world. I’m glad to see the bald eagles are back.

History of the Bald Eagle’s decline and recovery:
http://www.fws.gov/midwest/eagle/recovery/biologue.html

History and activities along the Maurice River:
http://www.mauricerivertwp.org/environment1.html
Posted by ferida at 1:51 PM