Good for You, Squirrel! 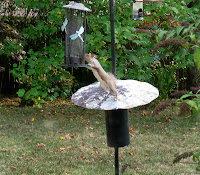 Good for You, Squirrel!

I was passing my kitchen window early this morning when I saw something that opened my eyes wide. A clever squirrel figured out how to bypass the baffles to the bird feeders. I didn’t see the actual process, just the result. There he/she was, atop the accordion baffle reaching for the seeds. Keeping squirrels off the feeders has been an ongoing struggle. We thought we had finally solved the problem as no squirrel had succeeded in getting past the baffles for a couple of years though there had been several attempts.

My husband was convinced that the squirrel leaped from the branches of the butterfly bush that was nearby. He pruned the bush (it needed it anyway), to make it harder for a squirrel to cross the chasm but I wonder if this particular one will find another way to get up there. I have seen squirrels traverse the whole backyard, leaping from black spruce branches to tulip tree limbs, dashing the length of our back neighbor’s fence, and hurling itself from one maple tree to another, before touching the ground. So perhaps the butterfly bush was the conduit but I suspect that the pruning was only a problem to be solved rather than an insurmountable barrier.

These creatures are certainly persistent. I have to respect that. If the adage “Practice makes perfect” works for people, why not for squirrels? Perseverance is often what leads to success. Writers revise their manuscripts for clarity, inventors discard what doesn’t work and enhance what does, chefs tweak recipes until the flavor is just right. So, I say Good for you, Squirrel! I hope the sunflowers you munched were sufficient reward for your efforts.

And here is an original story I wrote about squirrels in PhlMetropolis:
http://www.phlmetropolis.com/2011/02/outsmarted-by-a-squirrel.php#disqus_thread
Posted by ferida at 6:57 AM