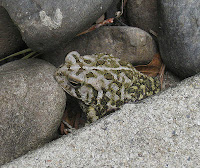 I think I saw a frog in my sister’s yard the other day. Or maybe it was a toad. It looked like a rock, snuggled as it was at the edge of the garden.

I know they are both amphibians but it is often hard to tell the difference. I thought frogs always stayed in the water and there is a pond in back of the house but this creature was in the driveway. So was it a toad? But then toads have smaller legs and tend to walk instead of leap and this one scuttled across the cement and then jumped. So was it a frog?

There are many overlaps between them as well as several distinguishing features.  There are differences in the eyes (frogs’ are bulgier) and the legs (toads’ are shorter). Frog skin is usually slimy (toad skin is usually dry) and toads have separate toes (frogs have webbed feet). But reading the literature, it seems that there are common characteristics in some of the areas, skin for instance and habitat. Sometimes it takes studied observation to determine the amphibian’s identity. There is similarity and at the same time individuality.

Which makes me wonder if frogs and toads can cause so much confusion how can we possibly make snap judgments about people? It may take a little time to get to know a person, to understand the person’s habits and intrinsic nature. Who takes leaps and who takes measured steps? Who blends in and who is out there? Pretty interesting, whether in the world of ponds or people.

Frog or toad?
http://allaboutfrogs.org/weird/general/frogtoad.html
Posted by ferida at 10:11 AM