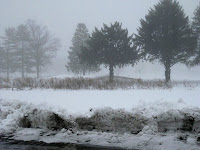 Last week there was fog. Lots of it. Neighborhood after neighborhood peeked out from behind its curtain and traffic lights emitted radiant glows as the fog cast auras around them.

Yes, I know that fog causes a decrease in visibility and can make driving dangerous. I also know that it blurs everything into a colorless mass of gray. The composition of fog is ordinary – dewy water droplets, sometimes icy crystals, hanging in the air. Fog, shmog, you say. What is the big deal about fog? It’s only a cloud, after all, that’s close to the ground.

Ah, but that is exactly the big deal. Fog says, SlowDown! Certainly for safety when driving; I don’t want to minimize the need for caution. It is more than that, though. A cloud is something mysterious. Fog tends to slow down our automatic assessment of what we normally see and perhaps our judgments of those things. It makes us pay attention, to be alert to the unexpected, sometimes for our personal safety. Yet conversely, it feeds our often-repressed inner child’s imagination. What might be hidden in the haze? A castle, perhaps, with a princess in a lofty tower. A parade marching by with the sound of its drums and excitement muffled (are those children on the sidewalk holding red and yellow balloons and cheering?). Where is that unicorn going?
Then there is the sheer beauty of a foggy day. It’s hard not to be captivated by how a fog hints at things, begging us – daring us – to fill in the blanks. Here are some captivating photos: http://www.terragalleria.com/pictures-subjects/fog/fog.9.html and some fog info as well www.crh.noaa.gov/jkl/?n=fog_types
As Carl Sandburg wrote: The fog comes on little cat feet...
Intriguing, isn't it?
Posted by ferida at 2:54 PM