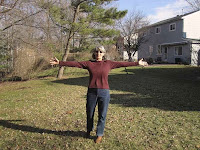 What a crazy month February has been! We had snow. There were temperatures in the teens. Then it warmed up. Friday the wind was whipping through with hurricane force. (Isn’t wind supposed to be a March feature?) Now the weatherpeople are telling us to expect, on the last February day, torrential rain. (April showers, anyone?) So on Sunday before the rain and after the wind and possibly in the middle of what is most likely a weather aberration, I am outside with no coat, enjoying the sunshine on a spring-like afternoon.

Punxatawney Phil, that famous groundhog predictor of when spring will arrive, came out of his burrow on Groundhog’s Day at Cobbler’s Knob in Punxatawney, PA and did not see his shadow. This supposedly means that we will have an early spring. My daffodils must believe it; they are sending up leaves. There are buds on the bushes and hints of greenery on most of the trees. They are taking their chances. I remember snowstorms as late as early April and surprise frosts when the calendar said it was officially spring. But I know that plants have their own timetable more dependent on the light and the earth’s axis than on the weather channel.

That doesn’t stop me from appreciating the day as it is, from being in my backyard, talking to the plants, pruning the dead wood, anticipating what I will do in the garden. It doesn’t stop my neighbors either. The kids across the street are shooting hoops, the girls next door are out in their leotards, back from dancing, without a coat in sight. I see strollers on the street and hear the joy of outdoor life. I think the variability of the weather adds awareness to our activities. I know it helps me focus on the present moment – and on this penultimate day in February it was delightful.
Posted by ferida at 7:11 AM