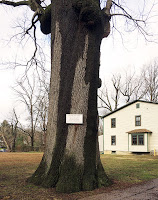 Driving through the neighboring town of Haddonfield, I saw this incredible black oak tree on one of its side streets. It’s trunk was huge! It seemed to be presiding over its neighbors. There was a sign attached which said that it was planted circa 1830 and was the second oldest black oak in New Jersey. Some history.

The town itself has quite a history. The Lenni Lenape tribe occupied much of the area including the land that eventually became Haddonfield. They left the area but artifacts like arrowheads and bits of pottery indicated their former presence. In 1682 Francis Collins, an English Quaker and a bricklayer, later settled there. At the beginning of the 1700s,  John Haddon, bought a 500 acre tract of land to escape religious persecution. It was passed along to his daughter. The town became a quaint place to live and shop. Because of its Quaker origins, it reluctantly was involved in the Revolutionary War.
The town was where the official State of New Jersey was declared. It’s interesting to read about: https://haddonfieldhistory.org/about/history-of-the-town-of-haddonfield/

I wondered about the tree’s history, what stories it might have been privy to. How did it come to live there at that exact spot?  Did it experience any hardships as it was growing? Did it depend on the kindness of strangers to help it flourish? How did it interact with the community and the natural creatures like squirrels and birds (and people) as it matured? What helped it to be the only one in that area to survive?

I might ask the same questions of ourselves. Our lives are  all rolled up in stories. We live through them as we interact with others. We create scenarios that forward our pathways. All life is connected and that connection enhances our existence. I don’t know how long the tree will continue to stand but it has already made its mark.

Lots to know about the Black Oak:
https://www.friendsofthewildflowergarden.org/pages/plants/oak_black.html
Posted by ferida at 10:41 AM