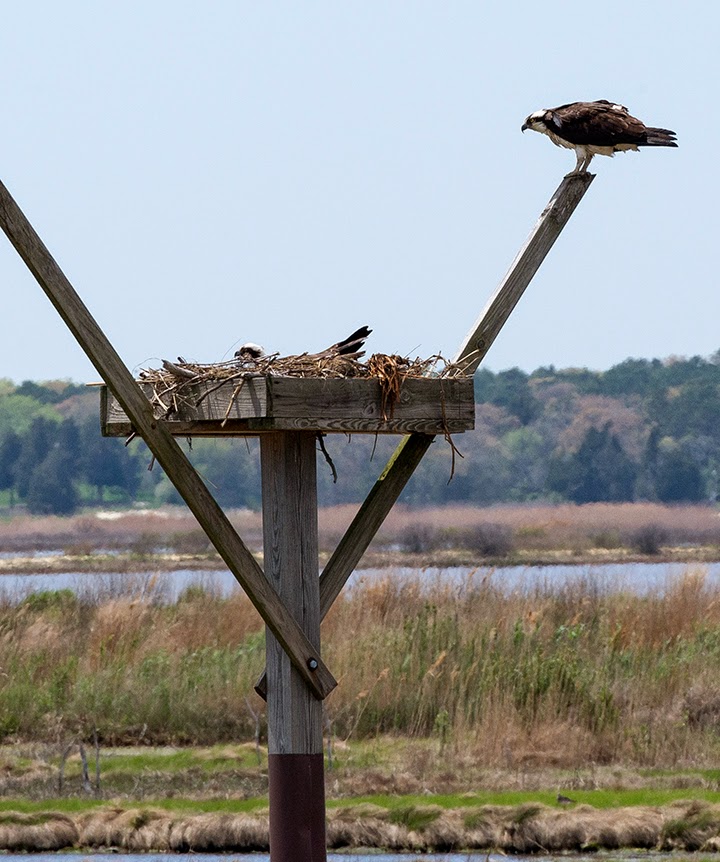 On Mother’s Day, we took a trip to the Edwin B. Forsythe National Wildlife Refuge in New Jersey. This is the kind of gift I love, to be out in natural settings, observing animals and birds in their native habitats.

One particular thing I observed that day was the scattering of osprey nests through the refuge. In the wild, the male osprey gathers the makings of the outside of the nest - twigs, sticks and branches - and the female lines it with grass, sod, vines, and sometimes found materials. They like to build their nests in open spaces, usually near a water source as they tend to eat fish exclusively, leading to their description as fish hawks. The problem is that ospreys may build nests on man-made structures such as telephone poles, utility poles, buildings, and other open spaces, which can pose a hazard for the birds. This was not the only hazard. Ospreys became endangered as a result of DDT spraying, before the chemical was banned in 1972. They have recently been rebounding, partly due to the support of wildlife and conservation organizations. They often construct platforms for ospreys to nest on, in protected areas out of harm’s way.

This day, we saw lots of ospreys perching alongside the nests. I wondered if they were the males or females as both tend to the nestlings. On this special day, I chose to imagine they were the mother birds, watching over their babies. Mothers, regardless of category, have much in common. I sent them silent messages of appreciation and understanding; raising youngsters is an all-consuming job (Can you see the baby in the nest?). I was glad that the adults were being cared for, too, by the wildlife conservation community. We need to support each other. It is cause for celebration when we can say that a species is reclaiming its right to exist.

Get a feeling about ospreys:
http://www.allaboutbirds.org/guide/osprey/lifehistory

Lots of photos of ospreys at the Edwin B. Forsythe National Wildlife Refuge:
http://www.conservewildlifenj.org/education/ospreycam/