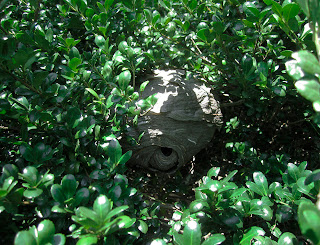 I was walking past the bushes in front of our house when I noticed an insect flying into the bush on the end. What was it? A small, black insect with yellow stripes across its lower body. A wasp!

I started paying more attention to the bush. Other wasps flew inside. Some flew out. There was quite a lot of activity. When I looked closer I saw something gray inside. It was a huge nest!  I passed that bush every day; how could I have missed it?

We’ve had wasps starting to build nests before, usually in the corner by our garage where they were visible and easy to eliminate while still small. But this nest, hidden as it was, went undetected and housed lots of wasps.

The nest that wasps build is papery, made from fiber the insects collect; snippets from man-made paper products such as paper bags or cardboard boxes, scrapings from the bark of trees. The insect then chews the fiber and mixes it with saliva. This makes the fiber extremely soft and moist. After a period of chewing, the wasp adds the paste to the nest structure and spreads it out with its mandibles and legs. After it thoroughly dries; a type of tough, durable paper is formed. Voila! An incredible nest.

While I was obsessing over what to do about it, my husband went out and sprayed it. A few wasps flew in and out but the activity pretty much stopped. Two days later, when I looked into the bush, I saw that the nest had split apart and the wasps were gone. I can’t say that I was sorry to see the end of the nest and its inhabitants - I remember being stung by one of those little guys and it wasn’t fun. But every creature has its value and these seem to be good pest controllers. I was torn between fear of being stung by wasps and the nuisance of being bitten by mosquitoes. The mosquitoes won – and I have the welts to prove it.

A close look at a wasp and some info about its nest building:
http://animals.nationalgeographic.com/animals/bugs/wasp/