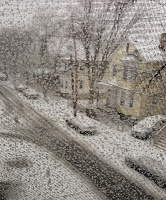 Another incredible storm has passed and it was a whopper! So much snow. Our part of South Jersey lucked out. We had just a few inches, which quickly melted as the temperature warmed. But that wasn’t the norm. Long Island was hit hard, again, with 2-3 feet of snow in many towns, not a welcome occurrence after Hurricane Sandy. Up further into Connecticut, the storm laid down even more snow, forty inches in Hamden and close to that in Milford. Many towns in Massachusetts had about two feet, though several counties had more than that.

Our daughter-in-law took this photo looking through the screen at the beginning of the snowstorm in Cambridge, Massachusetts, before the cars were completely covered and the accumulation had risen to over two-feet high. By the end of the day all that was seen were white lumps hunching up by the no longer visible curbs.

So what do we make of this Blizzard Nemo, as it is being called? Is it a freak happenstance or part of a pattern? And what about the frequency of recent tsunamis, wildfires, earthquakes, and flooding, and the increase of our global temperature by about a degree, which is no small amount?

I know there are people who call global warming a sham but the evidence is proving otherwise. It is not a subject that can be cozily determined by political preference. Photos show the glaciers are in retreat. Statistics point up the numbers of record-breaking storms that have been battering the earth in the past several years.

It seems like the right time to look at our environment in a responsible way. Let’s put aside selfish profiting and dogmatic inflexibility. We are at a point where we cannot undo much of what has happened but we needn’t continue our global disregard. We can cooperate for the benefit of all, and for respect for this magnificent planet we call home.

What does Global Warming mean?
http://www.nrdc.org/globalwarming/fcons/fcons1.asp
Polar Bears are in danger – but they are not the only ones:
http://www.pbs.org/wnet/nature/episodes/arctic-bears/%20the-melting-arctics-impact-on-itsecosystem/780/
Posted by ferida at 4:50 PM