Geese on the Go 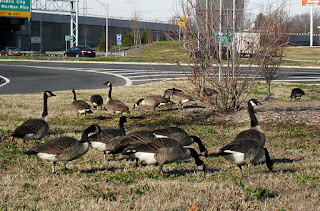 Geese have been on the go these past months. They can be seen, and heard, in their v-shaped migration to warmer climates. It’s a long trip and they have to stop along the way for rest and food. I was on my way home from grocery shopping when I saw a flock of geese chowing down on small patch of bedraggled grass between busy roadways. Not a particularly inviting place to take their respite. But then this area didn’t always look like this. The place where the geese had landed used to be a wide stretch of open, grassy ground. There were two roads that intersected, with green medians stretching along the length of them. There was no overpass, no jug handles, no ramps coming off the main arteries looping around and heading backwards in a confusing attempt to keep some semblance of approach to the town’s main street.

The geese had no map showing them the “improvements” to the road. Migration is partly a response to the freezing of the water supply up north and the lack of food during the cold months of the year. It also seems to be a learned behavior, calling geese year after year to the places they have been before. Which brings up the problem of the conflict between natural habitat and human expansion. Suburban growth has altered much of the local environment.

Things are changing, though. Many communities are beginning to see the value of preserving undeveloped land; people are working with their townships to preserve their farms, woodland, or open fields in a  movement to keep land free of development. Other things are changing, too. The temperature of the earth is heating up (this has been the warmest decade in recorded history) so maybe the geese won’t have to migrate in the future. It would be easier for them, no doubt, but I must say, I would miss seeing their elegant flight formations and hearing the call that heralds the change of seasons.

How is the earth heating up?
http://earthobservatory.nasa.gov/Features/GlobalWarming/page2.php
Posted by ferida at 1:15 PM