Squirrel, How Did You do It - This Time? 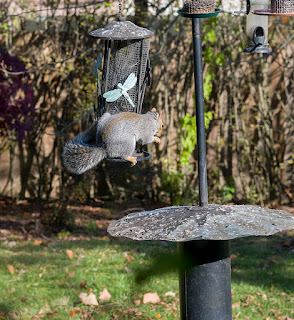 Squirrel, How Did You do It - This Time?

There was a squirrel on the bird feeder today. Ordinarily it would not have been much of a surprise to see one up there – they have outwitted most of our attempts to squirrel-proof the feeders. It came, however, at a time when I thought we had made it even harder for squirrels to get up there.

We had just pruned back the full, exuberant butterfly bushes the squirrels liked to use in their attempts at leaping for the seed. The bushes had been knocked over by good old Hurricane Sandy, exposing the root balls and shifting the branches sideways. Some of the branches had cracked off leaving the area littered with dead wood. We repositioned the plants, added soil to replace what had been blown away, and cut down the damaged limbs. The bushes that had previously been high and fluffy look so sad. We hope they will come back renewed in the spring. But, for now, we thought that it would deter the squirrels from trying to use them as a springboard toward the feeders. So how did that brazen critter get up there???

I thought that maybe the squirrel took a flying leap from the first floor rooftop and grabbed onto the feeder for dear life. But none had done it before so why now?

My husband suggested that since there were five squirrels grazing underneath that perhaps they had cooperated and stood one on top of the other to lift the lucky one who would then toss down some seed for all to eat. Then they started chasing each other so cooperation didn’t appear likely.

The birdbath seemed too far from the feeders to provide a viable starting point but then what’s too far for a squirrel determined to eat? We were reaching here but then that’s what squirrels do so well. They are actually able to reach ten times their body length and their brains are well adapted to problem solving. These are amazing beings. Really. Check them out http://www.globalanimal.org/2011/03/20/survival-of-the-nuttiest-squirrels/7018/

I have to admire squirrels. As I watch them I can almost see their brains at work. They are world survivors. Perhaps they could teach us a thing or two about adaptability though I suspect they are not good sharers. I suspect everyone has a squirrel story. I’d love to read about your squirrel encounters.

And while you are mulling over your interactions with squirrels watch this video. It may help you keep seed in the feeders and a smile on your face.
http://www.humanesociety.org/animals/resources/tips/squirrel_proof_feeder.html