The Ways of Blue Jays…and Others 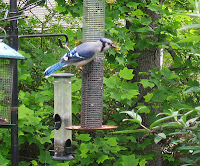 The Blue Jay family has spotted our feeders. Each day they plop their hefty bodies on one perch or another and munch away. Larger than a robin though smaller than a crow, they have presence. The smaller birds like the finches and sparrows scurry off to settle on our roof until the feeders stop shaking when the jays arrive. Watching from my kitchen window, I am quite taken by these birds.

One morning I took a photo when the Blue Jay was feeding. I could not tell if it was the male or female as they both have the same coloring. I watched for a while until the bird flew off. I put my camera away, prematurely it seems, because when I looked back the Blue Jay was there again and then a male Cardinal with its bright red feathers came along. And then a bright yellow male Goldfinch joined them. There was a bird rainbow right outside my window! I was glued to the sight. I finally ran to get my camera again but they were gone. The Blue Jay returned for another meal later in the day.

The colors and markings of birds are riveting. They add to the sense of the various species. Yet it is more the way they act that defines them. Birds have personalities both as a group and as individuals. Kind of like people. We often identify with groups that have similar interests but act individually within those groups. Blue Jays, for instance, will eat eggs of other birds but they will vigorously defend their own nestlings. People can be adamant about politics but can set aside dogma to help a neighbor in need. I guess we all, birds and humans, show our colors in different ways.