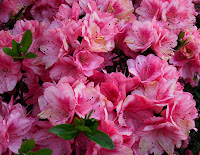 Azaleas are blooming now where I live, adding bursts of color that enliven neighborhood gardens. There are three azalea bushes in front of my house. One is huge, full of magnificent peachy-pink flowers. The middle bush is almost as beautiful though slightly smaller. They are both growing and thriving. The last bush, though, the one closest to the door, doesn’t do well. We planted it there to replace one that died previously. This one seems to be headed for the same fate. What could be causing two bushes to flourish and one to shrivel? They have the same soil (marl, so not very good though we did add topsoil when they were planted). The sad one does not get as much sun as the others as the house shadows it in the afternoon but azaleas like diffuse sunlight and gentle shade. We water them equally.  Last year I pruned all three and two out of three came back with even more flowers than ever.

I needed info and, hopefully, answers so I went online and found some sites that helped me know more about the plants I so love.

The University of Missouri Extension website http://extension.missouri.edu/p/G6825 gave me a clue. It said that azaleas should be protected from the wind and that houses make good barriers. These bushes are right in front of the house so that should be helpful except…we have noticed over the years that during a snowstorm the snow is blown in swirls in the front, up against the garage. We end up with drifts not far from where the distressed bush is planted. Maybe that is the reason for the azalea’s trouble – wind damage!

We’ll have to rethink the planting site. Perhaps the poor plant can be saved if we move it to a different part of our yard. Meanwhile, it’s good to know that we may have found the cause and it will alert us to what to be aware of in the future. This situation reminds me that all living things need nurturing according to individual needs. I hope I do a better job of it for the azaleas now.

Lots more information and some great photos:
http://www.caes.uga.edu/publications/pubDetail.cfm?pk_id=7732
And in answer to your questions:
http://www.usna.usda.gov/Gardens/faqs/azaleafaq2.html