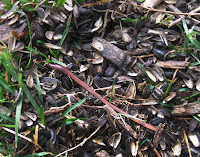 Since the weather has been so balmy recently, I decided to get my hands dirty and start cleaning up the garden. I pulled up a clump of dried weeds from underneath the butterfly bush and exposed a host of earthworms. They immediately squiggled for cover; they don’t care for light and they don’t want their skin to dry out. Each time I dug into the earth more of them appeared. It seems to be a banner year for worms.

When I was a kid the boys used to try to scare girls by dangling worms in front of us. The frequent, and expected, response was, “Ewww!” As a mom, I tried to help my own children see the value of worms, without the ewww factor.

Worms aerate the soil. They dig down and churn up the subsoil, allowing air and water to penetrate, a valuable asset especially for any garden with marl or clay. Their droppings, known as castings, contain nutrients that enrich the soil and consequently the plants that are grown there.

And worms are great recyclers. Redworms are industrious creatures. Vermicomposting is becoming more widespread. Why not use worms to eat our garbage and transform it into usable addition to our gardens? It’s a win-win situation.

How intriguing, the variety of life forms – the interaction, support, and sometimes challenge among us. We share this earth, after all. Worms deserve our respect.

Be a kid again with some simple facts about worms:

Meet Mary, the Worm Woman and learn how to make your own worm bin:

Get serious about worms: