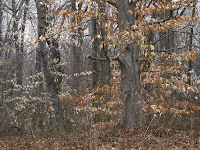 The forest looks barren and lonely in winter. Its trees still hold onto the dried, brown leaves, a memory of more verdant seasons. The wind rustles the crisp foliage in a visual image that would be a good set for a sub-titled noir film. The scene is deceptive, however. Hidden behind the dreariness is new growth, buds emerging from branches with their green promises. And somewhere within the plot and between the trees is new life. Deer are concealed there, beautiful, limber creatures that bound through the self-made paths. If this were a protected and enclosed environment it would be delightful to watch them. But deer cause problems.

This is the suburbs, after all, where houses border the rare patches of undeveloped land and cars zip by even on 25 MPH designated roadways. There is no protection here and deer often emerge at unexpected times, springing across the road into the middle of traffic. If they are lucky, the cars will stop but that isn’t always the case. I saw a dead deer among the edge grasses two weeks ago; my sister saw one this week. Then there was the time when three tiny deer sprinted in front of my car. They were young and small; they almost looked like large dogs. I pressed hard on my brakes and put on my flashers to alert the cars behind. The deer made it safely across into the woods – this time - though it might have ended differently. The number of deer-vehicle accidents is in the thousands across the United States; cars, motorists, and deer are not always compatible.

Suburbs in general, however, and deer, are. The animals prefer the edge of the forest to deep woods so these sparse woodlands are ideal. In developing the land, we have removed the deer’s predators so the deer population has ballooned. Ask landscapers and gardeners how they feel about deer and the response may be less than joyful. Deer damage trees, eat crops, destroy flower gardens. Overpopulation is not controllable by hunting in populated areas. Fences and repellents have varying degrees of success in keeping deer away. And deer are hosts to ticks that transmit Lyme Disease.

It is a shame that people and deer cannot exist more comfortably together. I would rather think Oh! Deer! with a sense of wonder in the sighting than Oh, dear! when I see one on the road. Here is an article about the white-tailed deer, the good, the bad, and the problematic, from the Cornell Cooperative Extension program: http://wildlifecontrol.info/pubs/documents/deer/deer_factsheet.pdf

Have you had any deer encounters?