The Quiet of Snow 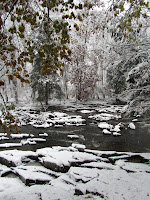 The Quiet of Snow

We had a little bit of snow last week, nothing much, just a layer of flakes on the lawns and sidewalks. It was melted by mid-morning but it was enough to remind me that the season is winter in spite of the record high temperatures. More than that, though, it brought a pause to an ordinary day. I find that snow quiets its surroundings and brings an awareness of beauty with its soft, white voice. Therese Halscheid captured this in the photo, “Autumn Snow on the Wickecheoke, 2012.”

Therese Halscheid, a poet and photographer, has been chronicling her poetic journey for the past eighteen years. Housesitting has allowed her to live simply, write and photograph unusual and rustic settings. She is scheduled for a solo exhibit, The Stockton Natural series, in early February. Her photographs document weather and its effects on the Wickecheoke Creek ind its surroundings in Pennsylvania. In this photo the interplay of sun and shadow, snow, and early morning mists capture the place’s mystical elements.

The exhibition runs February 2 to February 29 at Carversville General Store, 6208 Fleecydale Road,Carversville, PA 18913. For a real treat come meet Therese at the Opening Reception, Friday February 3, at 6:30-8:30. Maybe I'll see you there.