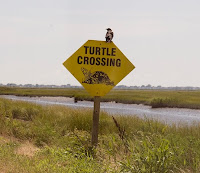 Why did the chicken cross the road? Remember that old riddle? There should have been a chicken crossing sign to help it across. I pay attention to those signs. I have seen deer crossing, geese crossing, duck crossing though no chicken crossing signs along my local roads. It makes me aware of where I am, which I guess is the purpose of the signs, and since those on the sign cannot be counted on to watch out for me, I had better be responsible and watch out for them.

This sign was posted at the Edwin B. Forsythe National Wildlife Refuge in New Jersey. I did not see any turtles crossing that day though there were turtles lounging in the mud of the marshes. I have seen a number of turtles crossing the road over the years in a variety of places. The first one was when I lived in Queens, New York. I was driving and slowed down because a large rock was in the middle of the street – only this rock was moving! I got out of my car and saw a box turtle lumbering along. I picked it up before the next car came whizzing by and took it to my apartment. I soon learned that box turtles are protected and I could not harbor it. I couldn’t put it back where I found it so I released it on an expanse of wooded land near a water source, a few miles out of harm’s way. I worried, though, that perhaps I was separating it from its family. Would it be lost? Would it be able to forge a satisfactory life in its new surroundings? I wished it well and hoped for the best.

As people take over more land space, the creatures that call those spaces home will find themselves crossing man-made roads, pathways that cut through their natural environments. The chickens/geese/ducks/turtles just want to get to the other side. They are taking their chances with us. Have we forgotten that these crossroads used to be their crossroads? Surely we can suspend our need to rush about to let them get safely across. I expect there will be more crossing signs as our population grows and our need for land expands. I will be looking for them to remind me that we share this earth with many others and to be careful of all life.

The Edwin B. Forsythe National Wildlife Refuge is a beautiful place to visit. It has a variety of birds, expansive marshes, and opportunities to stop and connect with nature.