Requiem for a Circle 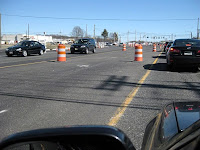 There was something quaint about the circles that dotted the roads when I first moved to South Jersey. They slowed the traffic as cars merged around them and hinted of a time when farms and orchards were abundant in the area. Then suburbia spread and the circles became congested. Instead of a smooth flow of vehicles there were snarls and occasional accidents. But there was still a bit of the country feel while the circles remained; they were grassy patches that connected roads divided by medians which each spring blossomed with color from the flowers the township planted. Then the state decided that the circles had to go. One by one they have been disappearing, replaced by wide stretches of tar and lots of traffic lights. The latest circle to go is the Marlton Circle, to be replaced by an overpass. Residents from the local townships understood that the tremendous increase in traffic demanded a more efficient plan but preferred that the redevelopment be more low-key. They suggested a simple intersection with turning lanes and smart lights to monitor the traffic. The state didn’t listen. So now, when Mother Nature brings out her beautiful blooms, this is what we have to look at. I hope that when the project is finished there will be some sense of what once existed here, that someone thought to engineer in some green. It isn’t only hardscaping that eases the movement of a community. Isn’t the flow of a neighborhood just as important as that of machines?
Posted by ferida at 6:07 PM