Nature in the Raw 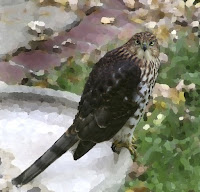 There were three loud thumps against my kitchen window this morning. Birds were trying to leave in a hurry and weren’t watching where they were going. I knew what that meant – the hawk was around. I looked across the yard toward the trees. There was a lot of activity by the squirrel’s nest in the white pine. Then the hawk scorched out of the branches, its wings fully extended. Did the squirrels attack it or did it have a meal clasped in its talons? I couldn’t see and wasn’t sure I wanted to know. I was caught between the privilege of seeing nature in the raw and the discomfort of worrying about the participants in the struggle for survival.
Note: Later in the day I saw a squirrel with its neck scraped raw and a tattered ear. It looked as if it had been in a fight. Maybe it had – with a hawk – and survived!
Posted by ferida at 4:10 PM