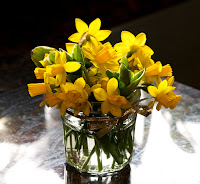 The mini daffodils were peeking out of the earth in our backyard, teasing the big daffies beside them to open up and greet the day. They are always a sweet next reminder after the crocuses that Spring is peeking through the end of Winter. The temperature was warmer and so it was easy to forget that sometimes Winter plays tricks on us.

The mini daffies in this tiny jar are not from my garden, though. They were given to me by a friend as a remembrance of my sister who passed away last year. It was my sister’s birthday. My friend knew how close we were and wanted to honor her and our relationship. It was a small momento but a compassionate one. I put it on my counter and smiled each time I passed by.

Later in the week the temperature cooled down and Winter came back. The minis and the regular daffodils outside are wilting on their stems. Tonight the weather prediction is for 8 – 1- inches of snow! All the daffies will be covered in white. I don’t know if they will be around when the snow melts but that’s okay, they’ll be back next year; they have a lasting power.

The minis in the jar lasted most of the week. They, too, have a lasting power, in my memory. Friendships come and go and some hang around regardless of the different seasons of life. I am grateful for my perennial garden that is there for me year after year, sharing its bounty, and I value my friendships that flower so beautifully in my heart.

Planting and caring for mini-daffodils:
http://homeguides.sfgate.com/care-miniature-daffodils-72982.html
Posted by ferida at 5:33 PM 2 comments: 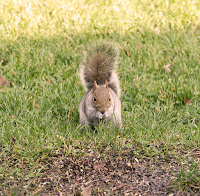 I realize that I have written about squirrels several times before but they keep presenting new things to address. This time it’s cars. Yes, cars. A squirrel has been squatting in our car engines, munching on the wires and causing quite a bit of damage. Both our cars, my husband’s and mine, have been victims over the last couple of years. There is nothing like rushing out in the morning, getting into the car, going to start the engine and nothing happens. No lights are on showing an electrical problem. Flip the hood and there is the evidence – disconnected wires, tooth gouges on the brake fluid reservoir cap and even dried grass and branches formed into a cozy nest.

Our cars have been towed to the service station. They were repaired and returned in good working order. But squirrels are persistent. One car was damaged, fixed, and a day later was back in the shop! When we tell others about our squirrel problems, more often than not we hear of other stories about the damage these critters have done.

So now we are on a squirrel discouragement program, asking around for natural squirrel repelling options. We were told that bird feeders are great attractions for squirrels. As we have several in our backyard, we are experimenting with not feeding the birds, at least for a while, to see if that keeps the squirrels away. We heard – and read – that cayenne pepper is a deterrent but when we sprinkled it under the feeders to test out the theory, the squirrels just ignored it and continued eating the seeds that had dropped to the ground. Maybe they like a spicy meal.

We placed net containers with mothballs under the cars and under the hoods. That smell should drive anything away though we aren’t certain it bothers you-know-who. We bought Squirrel Stopper, a spray meant to keep squirrels away from plants. It contains mint oil, rosemary oil, rotten whole egg solids, and vinegar among other natural ingredients, which was sprayed in the engine compartment to repel them. Does it? There is some evidence that the area has again been entered and perhaps some bite marks evident though not damaging. It almost sounds edible.

And now we’re bringing in the heavy-duty stuff, applying fox urine powder. If I were a squirrel and caught a whiff of this I would definitely keep away. Foxes are not squirrels’ friends.

I appreciate all the help we’ve been getting. I just hope one of the suggestions works. I don’t want to hurt the squirrels; I am a believer in every being having the right to exist. But come on, what about Live and Let live? Hear that, squirrels? Keep your distance and we can all be happy.

More suggestions and some cautions:
http://www.doityourself.com/stry/groundhogs
Posted by ferida at 1:39 PM 2 comments: