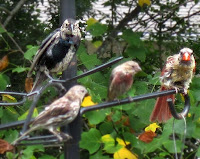 I always thought that Spring was the most fertile time of year for the outside creatures but there has been an outbreak of babies lately – tiny chipmunks, squirrels, and birds abound. It’s fun to watch their beginning interactions with the world as they grow. Just as with people babies, and then toddlers, everything is new. They have to figure things out. How can you balance on a feeder and get the seeds without falling off? It is okay to make friends with a hawk if you’re a squirrel? Should I worry about that cat who’s a lot bigger than my chipmunk brother and me? I keep telling my grandson, who is just four, that it isn’t safe to run into the street; sometimes I yell at a bunny who wanders innocently across. They will all get what they need to know one day. Growing up is developmental.

These birds have fledged out of their nests but have not come into their fullness yet. Young birds look particularly gawky. The scraggly cardinal will become a beautiful adult but right now feathers are all in disarray. The bluejay doesn’t have its wing colors in yet but it has its potential prominence. The finches are still speckled and despite their tentativeness are fast-winged.
This is a visual reminder of the growing process. We all are born needing to learn and adapt but we also bring with us the essence of who we are. It is a joint progression, the physical and elemental, the innate and the learned. Babies are all the same – cute, worrisome, full of incredible potential. A pretty grand progression, I think.
Posted by ferida at 9:49 AM 2 comments: 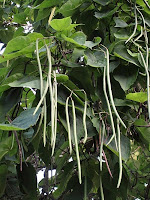 When out on a walk I came upon a tree I had not seen before. It had seed pods that looked like elongated green beans. They were over a foot long! The neighbor who owned the tree said it was a catalpa. It produced loads of beautiful flowers in the spring and was very prolific. I was impressed with what seemed like an exotic tree growing so close to home. Was this something I should consider for my own yard? I did some research and found out there are pros and cons to the catalpa, sometimes for exactly the same features.

The pros: The catalpa grows pretty much anywhere with southern and northern varieties. It produces lovely, sweet-smelling flower clusters. It is a good shade tree that grows fast and thrives pretty much in any condition – poor soil, inadequate drainage, drought – a frequent choice for naturalizing. The wood is strong and has an interesting grain and is often used for fence posts. The tree attracts what are called catalpa worms, which are good fishing bait.

The cons: The flowers have a smell that may be overpowering. They also produce pollen that can be extremely irritating to those with respiratory allergies. When the flowers drop it is quite messy. The seeds scatter and plant themselves indiscriminately so it may be hard to control their spread and growth. The worms are actually the larvae of catalpa sphynx moths that can denude the tree.

Quite a mixed bag of characteristics. It makes me think of people, each of us with our own pros and cons both in relating to others and for our own development. We are strong but can be overpowering. We grow fast but we don’t always grow up. We can attract the right things to ourselves but may also crave them to excess.
I think I will pass on planting my own catalpa tree. My yard seems happy and mostly balanced. The catalpa feels like too much of a good thing.
Posted by ferida at 8:55 AM 7 comments: 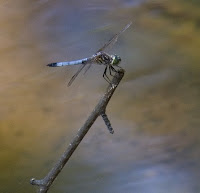 Dragonflies are complicated. They look so delicate yet they are tough survivors. They’ve been around for about 300 million years but except for a decrease in size look pretty much the same. They seem ethereal but are predators, on the prowl for feed since the day they are born. Ever try to catch one? They are fast insects. Their wings can go at 30 beats per minute! Their four wings go in all directions independently so they can go up, down, backwards, and sideways. They can even hover like a helicopter. They have incredible compound eyes that enable them to see 360 degrees – there is no sneaking up on them.

Dragonflies inspired myths in many cultures. Although they are harmless to humans, some people believed that they sting. They were sometimes called “darning needles” for fear that if a person slept outside the insect would sew up the person’s eyes. They also inspired art, poetry, and symbolism. Perhaps because of their swiftness they are often considered the harbingers of change. Since they breed near or on water, they have been associated with being a symbol of water purity.
I delight in their beauty and marvel at their versatility. But I would welcome their presence in my backyard for a simple reason; my yard has become a mosquito haven. They are out at all times of the day despite the fact that they breed in water and we are having drought conditions. Dragonflies eat mosquitoes. They could have a feast if they came to my house. And, I admit it, my eyes would feast on the beauty of these complicated insects.
Posted by ferida at 6:31 PM 2 comments: 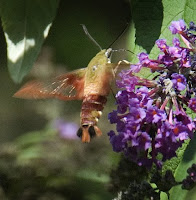 The butterfly bush has been attracting lots of creatures this season: lots of butterflies, of course, but also bees, moths, birds, and a variety of the hummingbird category. We did see the occasional hummingbird but more of the Clearwing Hummingbird Moth. There actually is a see-through (clear) portion of it s wing. When I first saw it I thought it was a hummingbird as it has the same kind of wing action, the habit of hovering at a plant, and a proboscis like the hummingbird, plus I had never heard of hummingbird moths before. But it is a moth, not a bird, no matter how similar. Now I am on the lookout for this intriguing expression of nature. It seems to be a regular visitor. It isn’t easy to photograph, however, because its wings move so fast. I read that they beat seventy times a second! Quite a feat, beating at that speed and staying in place. They are common in the northeast and easy to attract. Summer is just fascinating with its variety!

For photos and info about hummingbird moths check out http://www.silkmoths.bizland.com/hthysbe.htmFor an extensive list of butterflies and moths go to http://www.njaudubon.org/SectionBackyardHabitat/RecommendedNectarPlants.aspx
Posted by ferida at 8:16 AM 3 comments: 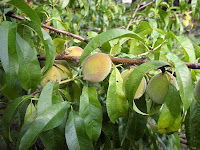 I love preaches – the smell of them, the color, even the fuzz. That’s why I planted a peach tree in my yard a few years back. It took a while before the tree established itself but then it started putting out tiny green fuzzballs. They were hard and as yet inedible but they were peaches! I was excited about the prospect of having fruit from my very own tree. I watched as they developed over the weeks. They started to change color, ever so slowly, and to grow. I checked on them each day and noticed that a few had what looked like bite marks. Oh, well, there were enough peaches growing to share with the wildlife that inhabited my backyard.

As they changed color, I planned for pies and cobblers and could already taste their drippy ripe goodness eaten plain. One day I knew that they would be ripe enough to pick, if not quite ready to eat, in a couple of days. I went out, with basket in hand, hoping that I would be able to reach all the peaches, even the ones at the top of my not so large tree. It was then that I discovered while I was willing to share, the squirrels were not. They had taken every single one of those peaches. “Hey,” I yelled to the creatures who scurried away at my approach. “You’re not being fair. You have to leave some fruit for the people!” That was my initiation into growing peaches. The squirrels never did get the message. I still love peaches and the ones I buy at the farmer’s market taste just the way I imagine mine would, if I ever had a chance to eat one.
Posted by ferida at 10:21 AM 2 comments: