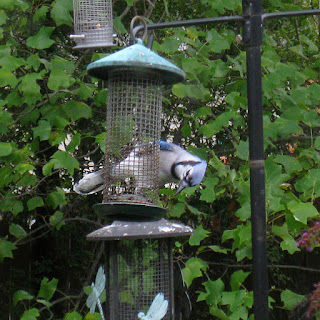 I was enjoying a peaceful moment on my patio out back on one of the last delightful summer days when I heard a Blue Jay call out. It wasn’t unusual for the jays to visit our backyard. They would usually land on the feeder with such a thump from their hefty bodies that the other birds would almost be flung off their perches.

Because I was reading, it took me a while to realize that I was hearing a lot of Blue Jay calls, the raucous cry that sounds like a squeaky door. When I paid attention I could pinpoint the cries from tree to tree and follow the bird’s movements so I knew that it was close. I saw the leaves flutter in the surrounding trees as the jay moved about. It wasn’t mating season so I wondered if it was in distress. Usually when a bird seems frantic it is warning of a predator in the neighborhood. Was there a hawk around? I looked up but didn’t see any evidence of one.

Was it just being aggressive? Blue Jays are known to be territorial and will go after an intruder be it a bird, a squirrel, a cat, sometimes even a human. But that is mostly at nesting time.

When I went inside and happened to look out my kitchen window, I saw a jay practically wrapped around one of the bird feeders, which, I noticed, was empty. Could that have been the reason for its vocal outburst? Blue Jays eat such a variety of foods - nuts, fruits, seeds, insects, mice, grasshoppers, beetles, caterpillars – surely a lack of sunflowers seeds should not have caused such verbal outrage. But maybe it was so used to this particular source of a meal that it wanted to make its dissatisfaction plain.

I don’t claim to understand nature nor have I observed it sufficiently to make any confident conclusions about what I see. I occasionally note consistencies so it is sometimes tempting to come to a conclusion but then I am often surprised. This applies to people, too. Motives, desire, necessity, instinct affect us all and make even the most usual unpredictable at times.

In this case, I just went out and filled the feeders. Several jays came around later and partook of the bounty. Perhaps one of them was the bird I had heard earlier, perhaps not. My desire is to provide seed for the birds who find their way to the feeders, at least most of the time. I guess the Blue Jay’s desire is to eat it.

Listen to the Blue Jay – and other birds:
http://www.birdjam.com/birdsong.php?id=5
Posted by ferida at 8:19 PM No comments: 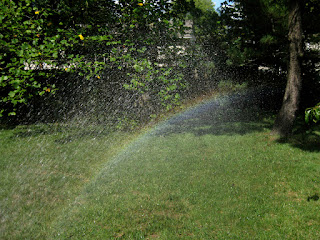 Rainbows have always fascinated us for a variety of reasons. They appear (excuse me) out of the blue. Their beauty is astounding. They combine the physical world with the metaphysical.

There is science behind the rainbow, to be sure. Here are the facts from the Franklin Institute: http://www.fi.edu/color/rainbow.html . But I don’t think facts will negate the ethereal quality a rainbow has over us. A rainbow shifts us out of our ordinary lives for the moment it takes to register in our minds. Little backyard rainbows (like the one in this photo) or great expansive ones like those seen in Hawaii all have the power to make us stop in our tracks and pay attention. We tend to halt what we are doing, where we are going, what we are saying when we see one.

We have a long history with rainbows, in myth and imagination, stories and symbolism. Joseph Panek looks at these connections on his blog http://www.aseekersthoughts.com/2012/03/rainbow-as-symbol.html

But there is more to a rainbow than either fact or belief. A rainbow causes people to dream. Somewhere beyond the rainbow is our ideal self, the success we desire, the love we cherish. It is there, our individual pot of gold, if only we can find it. Perhaps if we keep the image of the rainbow vibrant within us then possibility will always exist and the dreams that keep us energized will guide us through the days when rainbows are hidden by the clouds.

A free tutorial from Ian Plant on how to photograph a rainbow – and some amazing illustrations: http://www.ianplant.com/articles-photographing-rainbows.htm
Posted by ferida at 12:25 PM No comments:

Gardens – Our Inner Voices Made Visible

Gardens – Our Inner Voices Made Visible 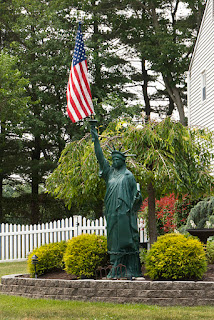 On this Labor Day weekend, I thought it would be appropriate to feature a neighbor’s garden. It has the usual bushes, specimen trees, a birdbath, and…the Statue of Liberty!  The weeping tree behind the statue almost looks like a background of fireworks. What a wonderful reminder of our roots.

It makes me aware that gardens are more than plants – they are our inner voices made visible. Some gardens are perfectly groomed, each blade of grass tended, every bush placed in a precise location. Some gardens are specific, favoring a particular style, an English garden perhaps, or a peaceful Zen garden, while others run wild, looking unkempt and troubled. And there are water gardens, vegetable gardens, raised bed gardens, container gardens, roof gardens, and don’t forget about flowers. Wow, what possibilities.

Our garden is somewhat planned but in many respects is free, as we tend to favor a fairly natural setting. We often take our cues from the plants themselves. The privet hedge we planted many years ago does not like the shade that has developed from our now mature trees and has turned woody. We probably will replace it, perhaps with the Rose of Sharon bushes that seem to be establishing themselves near the privets; they don’t seem to mind the shade at all.

And after seeing the statue in our neighbor’s yard, I think I would like to have something in our own that would reflect our personal spirits. Maybe a path of hand-crafted stepping stones meandering down to the back of the garden. Perhaps a trellis created from the tree limbs that have fallen from the maple trees for our veggies next spring. The choices are many, as many as we are in our great country.

Here are some garden ideas to consider:
http://greenwoodproject.com/2011/02/different-types-of-gardens/

Gardens through history and around the world…Incredible!
http://home.comcast.net/~lorraine.sherry/gardens/handouts/Examples.pdf
Posted by ferida at 9:43 AM No comments: