I was looking out my back door, debating if I wanted to go out. There were lots of things to do at the end of the year, backyard-wise. I could cut back the dead hibiscus stalks. The dried hydrangea flowers rebuked me for not having taken advantage of their beauty when they were full and vibrant and I should pull them off. The withered tomato vines were still in the garden.  Yet, I stood there doing nothing. The day was cold and gloomy. Why bother going out when it was so much better inside?

That’s when I saw it – the ghost cat. I had never seen such a fully white cat before. It was hustling through as if it was on a mission. I opened the door and called out, “Hey, cat!” It looked over at me for a nanosecond before continuing on its way. We grabbed a photo of it just before it disappeared into the neighbor’s yard.

Was it an albino cat or just a white one? I wasn’t close enough to see. An albino lacks pigment so its eyes seem pink, reflecting the blood vessels inside, and its skin is pink, too. Where did this cat come from? I hadn’t seen it before. But it shook off my lethargy and reminded me of the year about to pass.

This time of year brings up the ghosts of thoughts/actions/decisions past. Sometimes they are energizing, sometimes they are tinged with regret. Yet the seasons always shift, the days move on, and we are presented with new options. It is tempting to make resolutions for the coming year, decisions that frequently disappear almost as soon as they are made, that become the ghosts of the future. They are too definitive, I think.

This year I am making inclinations more than resolutions. I am inclined toward sending out more of my writing. I am leaning in the direction of renewing contact with people I like but have let slip away. I am tending toward being gentler in my approach to life, to laugh a lot more. Nothing momentous, just simple possibilities.

So on the cusp of 2014, I thank the ghost cat for waking me up. And I wish all of you the very best of the New Year.

Folk singer Woody Guthrie made his list of resolutions in 1933, when he was 31. He called them Rulin’s and they were quite practical. Did he follow them? Here they are:
http://www.businessinsider.com/woody-guthries-new-years-resolutions-2013-12

Something about Albino cats:
http://pets.thenest.com/rare-albino-kittens-11242.html
Posted by ferida at 6:58 PM 5 comments:

A Dusting of Possibilities

A Dusting of Possibilities

A major snowstorm was predicted – again. And again it didn’t happen. What we awoke to was a dusting of snow, barely enough to cover the sidewalks, cars, lawns, and trees with a trace of white. The sky was gray with clouds early on but as the morning progressed, the sky lightened. It seemed the storm had moved on, to the north and east, and the temperature will be too warm today for the snow to remain.

In a way I was disappointed; I like snow, even if I have to shovel it. The “dusting” wasn’t wasted on me, though; it was a meditative way to start the day. It hinted at possibilities. In the immediate case, it was the physical indication of what could have been, had the snowstorm occurred. But it seemed to be deeper than that, almost a reminder of the potential in all things. We often assume the “dusting” of an idea is all there is when, like weather reporting, that is really only the suggestion of something, a probability. Great discoveries start with a dusting of possibility.

It was a grand way to begin the day - a pristine moment of beauty and a subtle message to be the idea we are meant to be.

Learn about long-term weather predicting, find out weather forecasts for your area, and get a larger look at the world’s weather:
http://usatoday30.usatoday.com/weather/wout00.htm
Posted by ferida at 12:32 PM 2 comments: 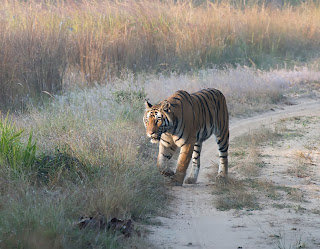 I like cats, even those strays that find themselves in my backyard. I shoo them away just to protect the birds on my feeders but I know they only leave if they choose to; they own whatever territory they are in.

Recently, I had the opportunity to expand my sense of backyard to Bandhavgarh Tiger Reserve in India. There was no guarantee that we would see any tigers as we drove around the national park but we were lucky and saw two, a male and a female, in different parts of the Reserve. Those cats were magnificent. There was no doubt about who owned this territory.  I was in awe as I sat in the open Jeep watching them stroll from the brush, unhurried and tolerant of the gawkers snapping their photos.

I found it quite a stunning reversal of awareness. It opens up a new perspective of what it means to co-exist in a world that is home to a great diversity of beings. We need to respect, and often to protect, life in its myriad forms. The Bandhavgarh Tiger Reserve is doing its part for the tigers.

Here are facts about and the history of Bandhavgarh National Park and its Tiger Reserve:
http://projecttiger.nic.in/bandhavgarh.htm
Posted by ferida at 7:50 AM 2 comments: